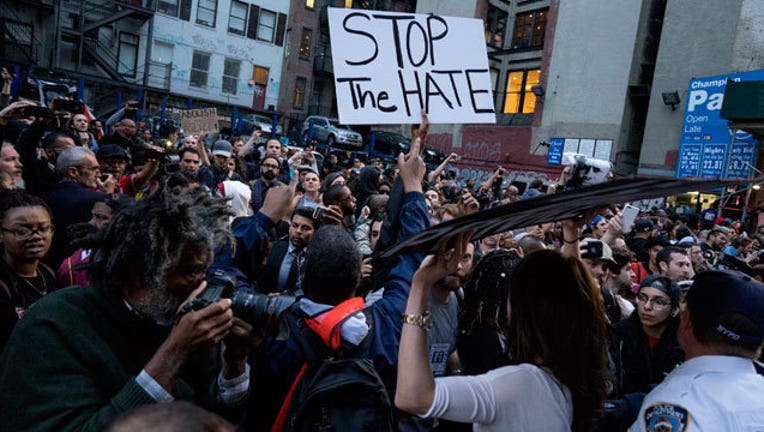 BALTIMORE (AP) — Thousands of people hit the streets in Baltimore and several other cities from Boston and New York to Indianapolis and Washington, D.C., on Wednesday to protest the death of a black man who died of spinal injuries after his arrest by Baltimore police and to demand reforms to police procedures.

While protests of the death of Freddie Gray were mostly peaceful, there were some arrests, including 16 in Baltimore and more than a dozen at a rally in Manhattan's Union Square. Gray, of Baltimore, was critically injured in police custody.

After meeting with faith leaders and a lawyer for the Gray family, Mayor Stephanie Rawlings-Blake said officials were working hard to make the investigation into Gray's death transparent and keep the community informed.

Hundreds of protesters, many of them students wearing backpacks, marched through downtown, calling for swift justice in the case of Gray.

Authorities carefully monitored the rally after teenagers started the violence Monday afternoon, throwing bricks and bottles at officers who had gathered near a major bus transfer point. The situation escalated from there, overwhelming police as protesters set fire to cars and buildings and raided stores.

Schools closed Tuesday because of the mayhem, but reopened Wednesday, after the city's first night of a curfew went off without the widespread violence many had feared.

About 3,000 police and National Guardsmen descended on the city to help keep order, and life wasn't likely to get completely back to normal anytime soon: The curfew was set to go back into effect at 10 p.m.

The curfew got off to a not-so-promising start Tuesday night when about 200 protesters ignored warnings from police and pleas from pastors and other community activists to disperse. Some threw water bottles or lay down on the ground.

A line of officers behind riot shields hurled tear gas canisters and fired pepper balls at the crowd, which dispersed in a matter of minutes.

Police said 35 people were arrested after the curfew went into effect.

And in what was one of the weirdest spectacles in major-league history, Wednesday afternoon's Baltimore Orioles game at Camden Yards was closed to the public for safety reasons.

Earlier in the day, protesters outside the office of Baltimore's top prosecutor said they supported State's Attorney Marilyn Mosby, who took office in January and pledged during her campaign to address aggressive police practices.

Mosby's office is expected on Friday to get investigative findings from police on Gray's death. She will then face a decision on whether and how to pursue charges against the six police officers who arrested Gray.