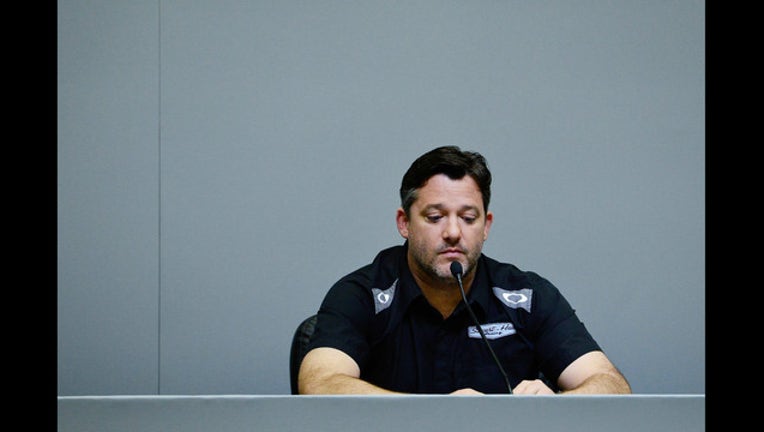 Tony Stewart speaks during a press conference on Sept. 29, 2014 in Kannapolis, North Carolina. He discussed the grand jury clearing him of any charges in the death of Sprint Car driver Kevin Ward Jr. (Photo by Grant Halverson/Getty Images)

UTICA, N.Y. (AP) - Tony Stewart and the parents of Kevin Ward Jr. have agreed to settle a wrongful death lawsuit filed by the family against the former NASCAR champion for his role in the death of their son.

Details of the agreement were not divulged at Thursday's hearing in federal court before Judge David Hurd. A jury trial had been set to begin May 7.

Minor stipulations remain to be settled and details of the agreement were not divulged at Thursday's hearing in federal court before Judge David Hurd. A jury trial had been set to begin May 7.

Hurd said the case would be dismissed once procedures regarding the estate of the victim were finalized. Stewart declined comment afterward, as did the Wards.

The 20-year-old Ward was killed Aug. 9, 2014, during a sprint car race on dirt at Canandaigua Motorsports Park in western New York.

Ward spun and crashed after contact with Stewart's car. He climbed out of the open-wheel car while the race was under caution and began walking down the dimly lit track in an apparent attempt to confront Stewart. One car appeared to swerve to avoid Ward, but he was struck by the back right tire of Stewart's car and died of blunt force trauma.

A grand jury heard testimony from more than two dozen witnesses, including accident reconstruction experts and drivers, and looked at photographs and video of the race. Two videos were viewed and enhanced, frames were isolated and viewed at different speeds and finally overlaid with grids and data, and showed Stewart had done nothing wrong.

The panel decided against bringing criminal charges against Stewart.

Authorities also determined that Ward was under the influence of marijuana the night he died and the levels were enough to impair judgment.

Ward's family said Stewart caused the fatal collision by improperly maneuvering toward the young driver after the race was placed under caution. Hurd ruled in December that the Ward family could move ahead with their claims against Stewart. Hurd concluded it was inappropriate at that stage of the case to draw factual conclusions from competing evidence in Ward's death, dismissed Stewart's counterclaim and said the case was best left to a jury.

The 46-year-old Stewart spent three weeks in seclusion at his Indiana home after Ward's death and described those weeks as the darkest of his life. He was emotionally drained when he returned to Cup competition and retired after the 2016 season to focus on his NASCAR racing team, which he co-owns with Gene Haas.

Stewart has 48 Cup victories and is a lock for NASCAR's Hall of Fame. Nicknamed "Smoke," he was one of the most proficient drivers in racing, winning in every kind of series, from sprint cars to a dominant stretch in NASCAR where he reeled off at least one win in 15 straight seasons.