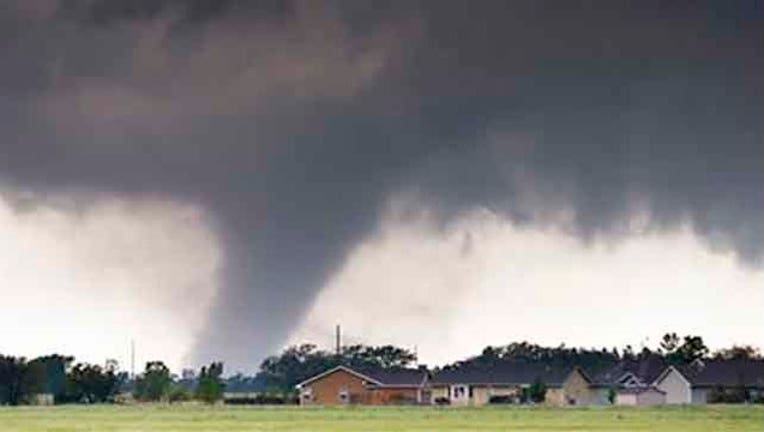 Forecasters declared a tornado emergency for Moore, where 24 people died in a storm two years ago, but Wednesday's storm lacked the same punch as the 2013 storm. No injuries were reported; television video showed brick facades off some buildings but no widespread destruction.

The Storm Prediction Center had warned that severe storms could hit much of Tornado Alley on Wednesday. Twisters were also reported north of Wichita, Kansas, and along the Kansas-Nebraska border.

Will Rogers World Airport sent several hundred people to a tunnel connecting the terminal with a parking garage as the storm approached. Passengers had to be re-screened because the safety area was outside the security zone, said spokeswoman Karen Carney. Some flights landed as the storm approached, but luggage service was delayed.

National Weather Service meteorologist Angela Pfannkuch said the rural town of Roseland, Nebraska, near Grand Island, was hit at 4:22 p.m. Wednesday. At least 10 to 15 homes in and around the town were damaged, but no injuries had been reported by 6 p.m.

A weak storm formed in southwestern Oklahoma shortly after 3 p.m., according to weather service meteorologist Michael Scotten, and the supercell thunderstorm that created it held together until it reached Oklahoma City.

School districts the storm's path held their pupils in safe places. Among the communities was Moore, where 24 died in a May 20, 2013, twister. Seven schoolchildren were among the dead.

Though Wednesday's storm wasn't as strong as the one two years ago, it appeared ominous. Tornado sirens blared in dozens of towns.

The Oklahoma Department of Emergency Management opened its operations center, but at early evening no county had requested aid.

"We haven't gotten any reports of damage from any of our local emergency managers yet," spokeswoman Keli Cain said. Officials closed Interstate 44; radar images showed the storm hugging the highway as it approached central Oklahoma.

Patrons at the Newcastle Casino were directed to a safe room, said Kym Koch, a spokeswoman for the casino. "They're sheltering in place," Koch said.

"This is the first of potentially several days of a severe weather risk," Thompson said. "There could be some pretty heavy rain overnight and eventually flooding could be a concern."

"People just really need to stay weather aware, have a plan and understand that severe storms are possible across portions of the southern plains almost daily through Saturday," Kurtz said.

In south-central Nebraska, about 110 miles southwest of Omaha, the Nuckolls County Sheriff's Office said a tornado hit near the Kansas border, between Hardy and Ruskin. Deputies were checking houses to ensure everyone was safe.