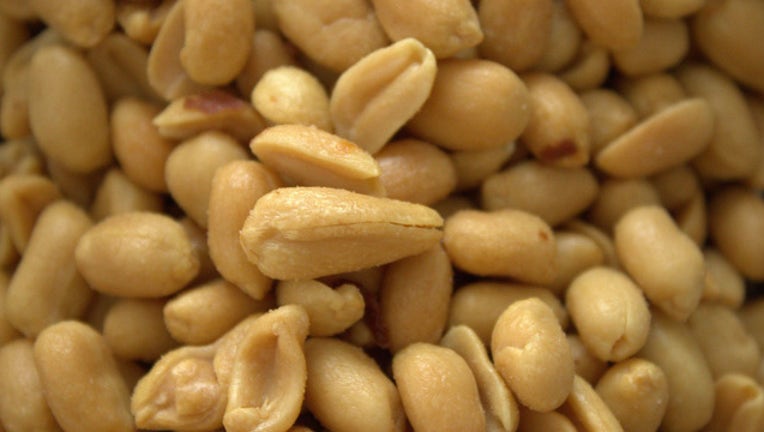 The first treatment to help prevent serious allergic reactions to peanuts may be on the way. A company said Tuesday that its daily capsules of peanut powder helped children build tolerance in a major study.

Millions of children are allergic to peanuts, and some may have life-threatening reactions if accidentally exposed to them. Doctors have been testing daily doses of peanut, contained in a capsule and sprinkled over food, as a way to prevent that by gradually getting them used to very small amounts.

California-based Aimmune Therapeutics said 67 percent of kids who had its experimental treatment were able to tolerate the equivalent of roughly two peanuts at the end of the study, compared to only 4 percent of others given a dummy powder.

But a big warning: Don't try this at home.

"It's potentially dangerous," said Dr. Stacie Jones, a University of Arkansas allergy specialist. "This is investigational. It has to be done in a very safe setting" to make sure kids can be treated fast for any bad reactions that occur, she said.

Jones helped lead the study, consults for the company, and will give the results at an allergy conference next month. The results have not yet been reviewed by independent experts.

The study involved nearly 500 kids ages 4 to 17 with allergies so severe that they had reactions to as little as a tenth of a peanut. They were given either capsules of peanut or a dummy powder in gradually increasing amounts for six months, then continued on that final level for another six months. Neither the participants nor their doctors knew who was getting what until the study ended.

About 20 percent of kids getting the peanut powder dropped out of the study, 12 percent due to reactions or other problems. The product showed "overall good safety," Jones said.

"It's exciting," said Dr. Stacy Dorris of Vanderbilt University who had no role in the study.

"This is a way to potentially protect people who are allergic from having a severe or even fatal reaction. But it's not a cure ... we don't know what would happen if they stop or discontinue" treatment, she said.

Dorris said she would consider trying it for her 8-year-old daughter who has a peanut allergy, but said the study's drop-out rate shows that "this is not for everybody. Some people are going to have too many side effects for them to be able to take this daily dose."

Dr. Andrew Bird, an allergy specialist at UT Southwestern Medical Center in Dallas, also consults for the company and had patients in the study. The treatment doesn't allow kids to eat peanuts as if they had no allergy, but research suggests that being able to tolerate at least one peanut should protect 95 percent of them from having a reaction if they are exposed to peanuts, he said.

That would be a relief to Cathy Heald, a Dallas mom whose 10-year-old son, Charlie, was in the study.

"We had to teach him that he has to ask about everything he eats from a very early age," she said. "He's described it as living in a cage, watching other people get to eat what they want."

Charlie was assigned to the group given fake peanut powder but has been able to get the real thing since the study ended, she said.

Aimmune plans to seek U.S. Food and Drug Administration approval for the treatment later this year and in Europe early next year.

The thinking about peanut allergies has changed in recent years, and experts now think early exposure helps prevent them from forming. Last year, the National Institutes of Health issued new advice, saying most babies should get peanut-containing foods starting around 6 months, in age-appropriate forms like watered-down peanut butter or peanut puffs - not whole peanuts because those are a choking hazard.