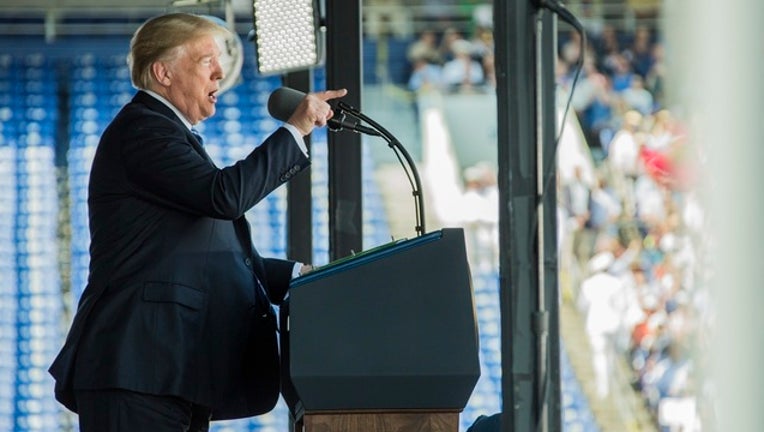 WASHINGTON (AP) - Trump administration officials vowed Friday to address some of issues that forced them to decide against criminally prosecuting any of the 42 members of a Central American migrant caravan arrested last weekend who crossed the U.S.-Mexico border illegally during a chaotic clash with Border Patrol agents.

Immigration officials often deport people who cross illegally instead of prosecuting them first for the federal crime of illegal entry because of "resource constraints, statutory roadblocks and process limitations," Homeland Security spokeswoman Katie Waldman said. Some of those roadblocks include that children cannot be separated from their parents.

But she said immigration officials would work with the Justice Department "to ensure that all future caravan members who participate in violent clashes with border personnel are prosecuted fully for all federal crimes they commit."

On Friday, federal prosecutors charged two caravan members with assault and illegally entering the U.S. In one instance, an 18-year-old from Honduras was caught with four others and elbowed a border patrol agent, officials said. They briefly escaped and were captured. In a separate incident about a quarter-mile away, a 26-year-old El Salvador man threw a punch at officers who found him crossing illegally, they said. He also ran and was later captured.

The caravan's size is highly unusual - there are more than 6,000 people waiting at the border with Tijuana, Mexico, and the Trump administration has conveyed an image of the group as rife with criminals. Officials said Friday that one caravan member, a 46-year-old Honduran man convicted of murder, was arrested trying to cross the border illegally. They also said they arrested a member of MS-13. Homeland Security officials have said as many as 600 people in the caravans have criminal records, but have not specified how they know, or given many details.

"This caravan has proven they have a propensity for violence and the American people agree: violence against our frontline law enforcement will not be tolerated," Waldman said.

But critics insist the violence is being exaggerated to stoke fears and push political agendas, and say most of the people coming are fleeing violence and poverty in Central America. They point to images of crying barefoot children running from clouds of tear gas after Sunday's clash as proof of the administration's inhumane treatment.

U.S. authorities say assailants threw a "hail of rocks" at Border Patrol agents in the Sunday chaos that erupted during a protest against U.S. asylum laws, striking four who escaped serious injury. That prompted Border Patrol agents to launch tear gas and pepper spray balls to quell the unrest in the crowd that included small children in diapers.

Officials say it appeared most of the rocks were thrown from the Mexico side and no one was charged on the U.S. side with assaulting the agents.

Those who were arrested were accused of illegally entering the U.S.; 27 were men and 15 women and children. Charges were not filed because the administration generally doesn't separate families and because Customs and Border Protection didn't collect enough evidence needed to build cases, including the names of arresting officers, according to a U.S. official familiar with the matter who was not authorized to discuss it publicly and spoke on condition of anonymity.

Children had been separated from their parents this summer during a period when a zero-tolerance policy was used at the border, but the separations were stopped by Trump following worldwide outrage.

U.S. authorities are working on a new system to better record evidence if similar circumstances arise in the future, the official said.

Thousands of caravan members have been arriving in recent weeks - nearly 6,000 people have been staying at a sports complex in Tijuana packed into a space adequate for half that many people. Mud, lice infestations and respiratory infections are rampant.

Many want to seek asylum in the United States, but inspectors at the San Ysidro border crossing are processing about 100 claims a day, meaning they will likely have to wait weeks or months.

On Friday, a federal judge refused to immediately allow the Trump administration to enforce a ban on asylum for any immigrants who illegally cross the U.S.-Mexico border.

Judge Jon Tigar rejected the Justice Department's request to suspend his earlier order temporarily blocking the ban. The administration had still not shown that the ban was legal, or that any harm would come from continuing to implement existing immigration laws, Tigar said in his order.