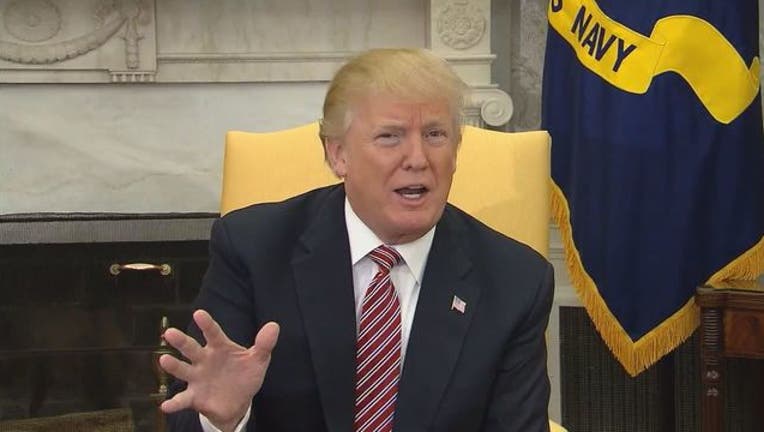 The scourge has torn through the rural and working-class communities that in large numbers voted for Trump. And the president, though he has come under criticism for being slow to unveil his plan, has seized on harsh sentences as key to stopping the plague.

"Toughness is the thing that they most fear," Trump said.

The president made his announcement in New Hampshire, a state hit hard by opioids and an early marker for the re-election campaign he has already announced. Trump called for broadening education and awareness about drug addiction while expanding access to proven treatment and recovery efforts. But the backbone of his plan is to toughen punishments for those caught trafficking highly addictive drugs.

"This isn't about nice anymore," Trump said. "This is about winning a very, very tough problem and if we don't get very tough on these dealers it's not going to happen folks. ... I want to win this battle."

The president formalized what he had long mused about: that if a person in the U.S. can get the death penalty or life in prison for shooting one person, a similar punishment should be given to a drug dealer whose product potentially kills thousands.

Trump has long spoken approvingly about countries like Singapore that harshly punish dealers. During a trip to Asia last fall, he did not publicly rebuke Philippines President Rodrigo Duterte, who authorized extrajudicial killings of drug dealers.

Outside a local firehouse that Trump visited before Monday's speech, someone compared the two leaders with a sign that said: "Donald J. Duterte."

"Drug traffickers kill so many thousands of our citizens every year," Trump said. "That's why my Department of Justice will be seeking so many tougher penalties than we've ever had and we'll be focusing on the penalties that I talked about previously for big pushers, the ones that are killing so many people, and that penalty is going to be the death penalty."

He added: "Other countries don't play games ... But the ultimate penalty has to be the death penalty."

The Justice Department said the federal death penalty is available for limited drug-related offenses, including violations of the "drug kingpin" provisions in federal law.

It is not clear if the death penalty, even for traffickers whose product causes multiple deaths, would be constitutional. Doug Berman, a law professor at Ohio State University, predicted the issue would go all the way to the U.S. Supreme Court.

The president's plan drew criticism from some Democrats, including Sen. Dick Durbin of Illinois, who said "we can't arrest our way out of the opioid epidemic" and noted that "the war on drugs didn't work in the '80s."

Opioids, including prescription opioids, heroin and synthetic drugs such as fentanyl, killed more than 42,000 people in the U.S. in 2016, more than any other year on record, according to the Centers for Disease Control and Prevention.

Much of what Trump highlighted Monday was largely repackaged ideas he's already endorsed.

He called for a nationwide public awareness campaign, which he announced in the fall, including broadcasting "great commercials" to scare kids away from dabbling in drugs. He announced a new website, www.crisisnextdoor.gov, where members of the public can share stories about the dangers of opioid addiction.

Trump said the administration will work to cut the number of opioid prescriptions that are filled by one-third within three years.

The president also discussed how his policies, including building a U.S.-Mexico border wall and punishing "sanctuary" cities that refuse to comply with federal immigration authorities, will help reduce the flow of drugs.

Monday was Trump's first visit as president to New Hampshire, which has long occupied a special place in his political rise. He captured his first Republican presidential primary here in 2016, though he narrowly lost in the general election to Democrat Hillary Clinton.

Though the 2020 election is more than 30 months away, early jockeying already is happening in states that play an outsized early role in choosing a party's nominee. Retiring Sen. Jeff Flake, R-Ariz., a persistent Trump critic, visited New Hampshire, which holds the nation's first presidential primary, last week. He told Republicans someone needs to stop Trump - and it could be him if no one steps up.