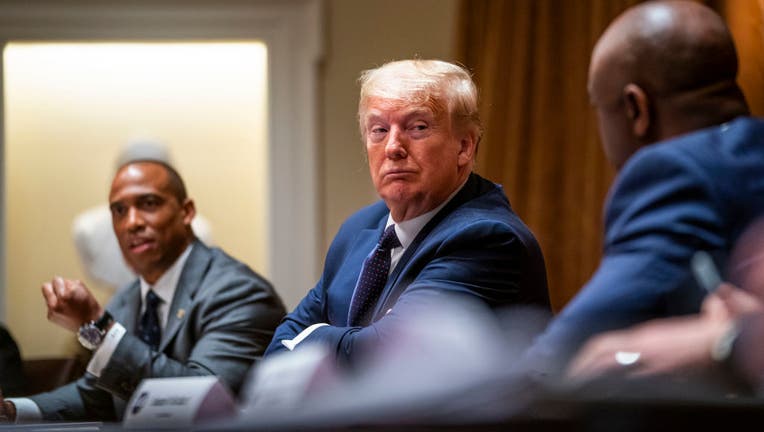 WASHINGTON - President Donald Trump won at least a temporary reprieve from the Supreme Court earlier this week in keeping secret grand jury materials from the Russia investigation away from Democratic lawmakers. The president and his administration are counting on the justices for more help to stymie other investigations and lawsuits.

The high court is weighing Trump’s bid to block subpoenas for his tax, banking and financial records. It will soon be asked by the administration to kill a lawsuit alleging that Trump is illegally profiting from his luxury hotel near the White House. And a dispute over Congress' demand for the testimony of former White House counsel Don McGahn also could find its way to the justices before long.

Trump has predicted that the court with a conservative majority that includes two of his appointees, Justices Neil Gorsuch and Brett Kavanaugh, would be more sympathetic than lower courts that have repeatedly ruled against him. And his administration has sought the court's emergency intervention at early stages of court cases far more often than both Democratic and Republican predecessors, according to data compiled by University of Texas law professor Stephen Vladeck.

The administration says Democrats are obsessed with embarrassing Trump at all costs. Trump has called himself a victim of “presidential harassment” and ordered his administration not to cooperate with investigations by the Democratic-led House.

In arguing for the invalidation of congressional subpoenas for Trump's private financial records, the Justice Department told the Supreme Court that the subpoenas pose “a serious risk of harassing the President and distracting him from his constitutional duties.”

McGahn should not be forced to appear before Congress, the administration argues, because he is among a band of presidential advisers who have “absolute immunity" from testifying about their interactions with the president. The full federal appeals court in Washington recently heard arguments in the case and could rule at any time.

The president's critics argue that Trump has embraced a dangerous view of the presidency as being above the law.

“The common theme throughout the Trump presidency has been a complete lack of accountability,” said Ben Berwick, a lawyer with the anti-Trump group Protect Democracy. “In case after case, the position taken by Trump and his lawyers is that nothing and no one -- not courts, not Congress, not federal or state law enforcement, not inspectors general -- can hold him accountable or act as a check on his power."

In the dispute over grand jury materials from special counsel Robert Mueller's investigation, U.S. District Judge Beryl Howell called out the Justice Department and the administration. “The reality is that DOJ and the White House have been openly stonewalling the House’s efforts to get information by subpoena and by agreement, and the White House has flatly stated that the Administration will not cooperate with congressional requests for information," Howell wrote in ordering that the materials be turned over. Her ruling is on hold.

The Supreme Court has so far refrained from definitive rulings in these clashes. But Trump has been the chief beneficiary of the court's actions because they have prevented investigators from obtaining what they are seeking.

“We’ve already lost nine months of time in this investigation due to this lawsuit," New York prosecutor Carey Dunne said in his arguments in support of enforcing a subpoena for Trump's tax returns. Trump's lawyers said local prosecutors should not be allowed even to investigate Trump while he is president.

Each passing day without a court decision, Dunne said, amounts to “the same kind of temporary absolute immunity that the President is seeking here."

It's possible that the decisions in the subpoena cases, expected by early summer, could leave legal issues unresolved and lead to additional consideration by lower courts, further delaying a final order on the subpoenas.

That would suit Trump and his supporters, who would like to run out the clock at least until after Election Day.

It might also suit the Supreme Court and especially Chief Justice John Roberts, who has warned of the dangers of having the court viewed as just another political institution. Federal judges have made clear they prefer that the White House and Congress resolve their disagreements without judicial intervention, when possible.

In the event Democrat Joe Biden is elected president or Republicans regain control of the House of Representatives, legal fights over subpoenas and grand jury materials might end. Biden's administration might have little interest in fighting to protect the Russia grand jury documents. If Republicans were in charge of the House, they probably would abandon subpoena fights aimed at Trump.

In either case, the Supreme Court would avoid having to make a decision that might split the justices along liberal and conservative lines and underscore perceptions of a politically motivated court.