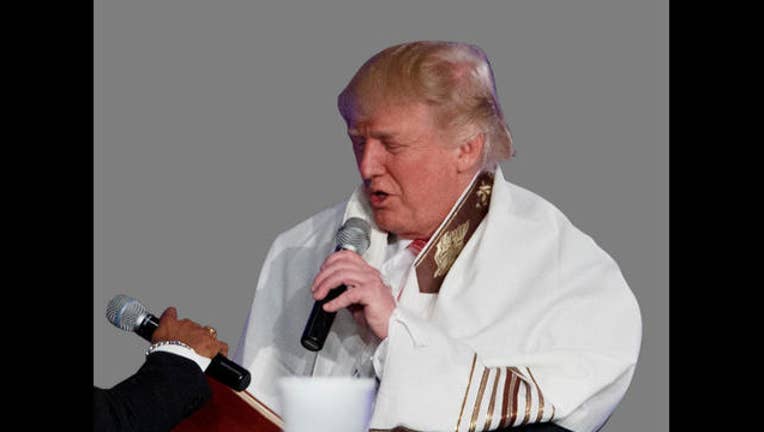 WASHINGTON (AP) -- Declaring he was giving churches their "voices back," President Donald Trump signed an executive order Thursday aimed at easing an IRS rule limiting political activity for religious organizations -- a move that fell far short of a more sweeping order some supporters had expected.

As he marked the National Day of Prayer at the White House on Thursday, Trump signed the order on religious freedom, which directs the Treasury Department to not take "adverse action" over churches or religious organizations for political speech. The rule has rarely been enforced. Still, opponents said the restrictions have a chilling effect on free speech.

"This financial threat against the faith community is over," Trump said. He has long promised the conservative Christian supporters who helped him win the White House that he would block the regulation, known as the Johnson Amendment, though any repeal would have to be done by Congress.

The amendment , named for then-Sen. Lyndon Johnson, was put into force in 1954. The policy allows a wide range of advocacy on political issues, but in the case of houses of worship, it bars electioneering and outright political endorsements from the pulpit.

The IRS does not make public its investigations of such cases, but only one church is known to have lost its tax-exempt status as a result of the prohibition.

The order did not match a broader, much more detailed draft leaked earlier this year that included provisions on conscience protection for faith-based ministries, schools and federal workers across an array of agencies. Robin Fretwell Wilson, a legal scholar who advises legislators on balancing LGBT rights and religious liberty, said the language in the document was so vague, it was unclear what impact it would have.

"I'm not seeing a lot more shield around people of faith from this," said Wilson, a professor at the University of Illinois at Urbana-Champaign.

Leaders of some faith groups condemned the order, saying it would damage congregations by politicizing them. But the American Civil Liberties Union announced late Thursday it had dropped its initial plan to file a lawsuit to prevent the order from taking effect, saying "today's executive order signing was an elaborate photo-op with no discernible policy outcome."

Trump spoke to religious leaders in the Rose Garden, where he also announced he'll visit Israel, Saudi Arabia and the Vatican -- including a meeting with Pope Francis -- on his first foreign trip. In the audience were members of the Little Sisters of the Poor, who run more than two dozen nursing homes for impoverished seniors, and object to having to pay for birth control in their health plans.

Several religious leaders who supported Trump praised the order as a first step in what would be a lengthy, difficult process of reworking a web of regulations that many religious conservatives consider unfair.

Tony Perkins, head of the conservative Family Research Council, which has advocated for a repeal of the IRS restrictions on political speech, said Trump has started "a multi-phase process" on religious liberty that will "keep the promises the administration has made to people of faith."

"Though we appreciate the spirit of today's gesture, vague instructions to federal agencies simply leaves them wiggle room to ignore that gesture, regardless of the spirit in which it was intended," Farris said in a statement.