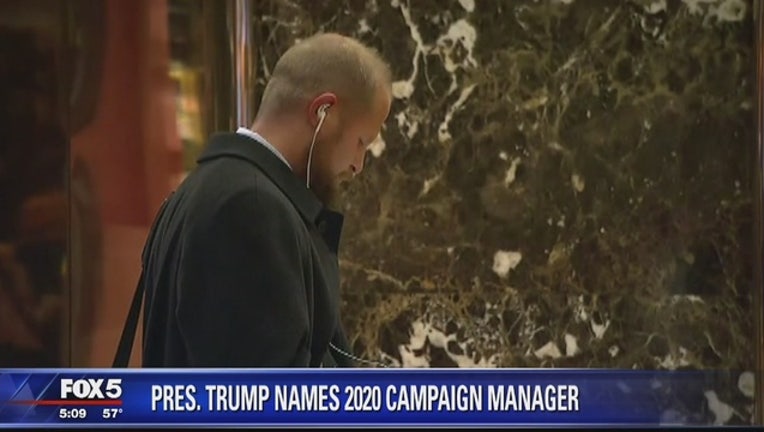 The president on Tuesday named former digital adviser Brad Parscale as campaign manager for his 2020 election bid, a sign he is prioritizing loyalty as he works to secure his own political future in what is shaping up to be a bruising 2018 midterm election cycle for the GOP. The rise of Parscale, largely unknown in politics until just two years ago, has been inextricably linked to Trump's own political success.

In a statement, the Trump campaign said Parscale will lead "advanced planning" for the 2020 effort, and that the campaign also will be engaged in the midterm elections.

The announcement turned heads on Capitol Hill, where Republicans have been lobbying the president for months to keep focused on the November 2018 contests -- with leaders and political aides warning Trump that Democrats could gain subpoena power over his administration if Republicans lose the House or Senate.

Trump, whose poll numbers have lagged recent predecessors, has left little doubt about his intention to seek re-election. He filed the paperwork to organize his re-election committee on Inauguration Day, held his first campaign rally on Feb. 18, 2017, and has mused publicly about potential Democratic challengers.

Parscale has long been close with the Trump family, a priority for the president as he begins planning his re-election strategy, according to a person familiar with campaign planning but not authorized to speak publicly about private discussions.

Parscale entered the Trump orbit in 2011 by doing web design work for the Trump family -- including the president's real estate firm and his son Eric Trump's charity -- before Kushner hired him for the campaign.

Parscale and Kushner helped craft the 2016 team's digital strategy, which has been widely credited with helping Trump pull off his upset victory. Paracale also established close ties with Eric Trump and his wife, Lara, who in turn was hired by Parscale's Texas-based digital firm.

Working with Kushner, Parscale and Katie Walsh -- then the chief of staff of the Republican National Committee -- served as de-facto campaign managers, overseeing nearly all aspects of campaign.

In an interview with CBS's "60 Minutes" last year, Parscale described how a team that grew to 100 people created 50,000 to 60,000 ads on Facebook daily to reach different swaths of Trump supporters to maximize support and online donations.

The selection of Parscale for the campaign comes as Kushner's tenure in the White House has been cast into doubt in recent weeks. Chief of staff John Kelly's crackdown on interim security clearances has called into question Kushner's ability to access highly classified information. And Tuesday saw the third announcement in as many months of the departure of a top Kushner ally in the White House, deputy communications director Josh Raffel.

Trump has placed high value on loyalty in his next campaign after feeling burned by some of his previous campaign staffers, according to multiple people familiar with his thinking. Trump has denounced and publicly marginalized Paul Manafort, his former campaign chairman, whom he blames for smearing the president's reputation with his own entanglements in Russia. Manafort is now facing charges brought by special counsel Robert Mueller on money laundering and bank fraud relating to his past work on behalf of the Ukrainian government.

And Trump later soured on a subsequent campaign force, Steve Bannon, who drew the president's wrath inside the White House for taking too much of the spotlight and portraying his family in a negative light in interviews with "Fire and Fury" author Michael Wolff.

Parscale himself is not without critics in Trump's factious political circle. A self-taught coder who wasn't involved in politics until the 2016 effort, some Trump allies raised doubts about his preparedness to run the campaign, suggesting he could be the political equivalent of a one-hit wonder. Parscale did not respond to requests for comment.

The rollout of Parscale's announcement was not without a hitch. A statement released Tuesday by the Trump campaign attributed to White House senior adviser Jared Kushner was in apparent violation of federal law prohibiting the use of official titles in political work.

The campaign used Kushner's title and his position as an "assistant to the president" in its press release announcing Parscale's role. The title was removed from the copy of the release posted to the campaign website after questions from The Associated Press.

The Hatch Act bars government employees from using their official titles in political work. Press secretary Sarah Huckabee Sanders said Tuesday all senior official and Cabinet secretaries have been briefed on the prohibition.

The White House says Kushner offered the statement in his personal capacity: "The campaign committee inadvertently added his White House title when it drafted the announcement and subsequently removed the reference when instructed to do so by the White House."

Trump's campaign remains based in New York, its headquarters just floors below the president's penthouse in Trump Tower. Lara Trump has become, in many ways, the face of the re-election campaign in its early days. She has appeared in a series of online news videos meant to be an alternative to mainstream media outlets and, alongside Glassner, has helped steer Trump's initial fundraising efforts and schedule his signature campaign rallies.

She and her husband, key members of Trump's first campaign, are expected to play an even larger role for 2020. Kushner also has been discussed as someone to return to leading the re-election effort, according to the person familiar with campaign strategy.

In a statement, Eric Trump said Parscale "has our family's complete trust and is the perfect person to be at the helm of the campaign."

Kushner also praised Parscale in a statement. "Brad was essential in bringing a disciplined technology and data-driven approach to how the 2016 campaign was run," he said, adding that Parscale will "help build a best-in-class campaign."