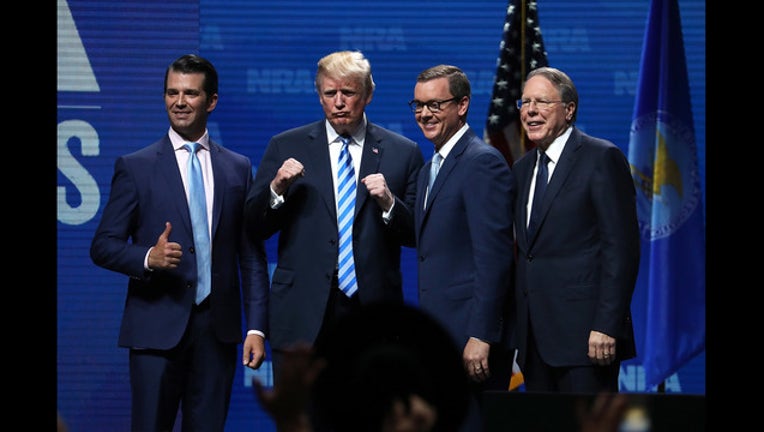 DALLAS (AP) -- President Donald Trump told supporters at the National Rifle Association on Friday that the Second Amendment will "never ever be under siege as long as I am your president."

Taking a break from the escalating pressures of the Russia probe and the Stormy Daniels case, Trump returned to the NRA's annual convention, his fourth consecutive appearance. En route, Trump called the NRA a "truly great organization that loves this country."

Last year, Trump became the first sitting president to appear before the NRA convention in more than 30 years. But this year's speech comes as the issue of gun violence takes on new urgency after one of the deadliest school shootings in U.S. history.

Though Trump embraced the Second Amendment right to bear arms before the assembly, he had temporarily strayed from the strong anti-gun control message in the wake of the school shooting in Parkland, Florida.

Student survivors of the Feb. 14 shooting at Marjory Stoneman Douglas High School that left 17 people dead are now leading a massive national gun control movement. While the shooting has not led to major changes from the White House or the Republican-led Congress, it did -- at least briefly -- prompt Trump to declare that he would stand up to the powerful gun lobby. He later backpedaled on that tough talk.

Trump's attendance at this year's NRA convention was announced just days ago and came after Vice President Mike Pence already was scheduled to appear. Asked why Trump was attending, given the current political tensions around gun violence, White House press secretary Sarah Huckabee Sanders said this week that safety was a "big priority." But, she added, "We also support the Second Amendment, and strongly support it, and don't see there to be a problem with speaking at the National Rifle Association's meeting."

Trump has long enjoyed strong backing from the NRA, which spent about $30 million in support of his presidential campaign. The NRA showcased its high-profile guests for the event, with NRA Executive Director Chris Cox saying on Twitter: "We are honored to celebrate American Freedom with (at)realDonaldTrump, (at)VP Mike Pence and others. (hash)2A (hash)watchtheleftmeltdown"

But one of the Parkland student survivors, David Hogg, was critical of Trump's planned attendance.

"It's kind of hypocritical of him to go there after saying so many politicians bow to the NRA and are owned by them," Hogg said. "It proves that his heart and his wallet are in the same place."

During a televised gun meeting with lawmakers in late February, Trump wagged his finger at a Republican senator and scolded him for being "afraid of the NRA," declaring that he would stand up to the group and finally get results in quelling gun violence.

He praised members of the gun lobby as "great patriots" but declared "that doesn't mean we have to agree on everything. It doesn't make sense that I have to wait until I'm 21 to get a handgun, but I can get this weapon at 18." He was referring to the AR-15 the Parkland shooting suspect is accused of using.

Those words rattled some Republicans in Congress and sparked hope among gun-control advocates that, unlike after previous mass shootings, tougher regulations would be enacted this time. But Trump later retreated on those words, expressing support for modest changes to the background check system, as well as arming teachers.

After expressing interest in increasing the minimum age to purchase a so-called assault weapon to 21, Trump later declared there was "not much political support" for the move. He then pushed off the issue of age restrictions by assigning the question to a commission.

Trump's moves have drawn concerns from both sides of the gun debate.

"He ran as supposedly the best friend of the Second Amendment and has become gun grabber in chief," said Michael Hammond, legislative counsel to the Gun Owners of America. Hammond said his members were upset Trump had approved a spending bill that included background check updates. "We're not confident at all. We are very disappointed."

Kristin Brown, of the Brady Campaign to Prevent Gun Violence, said Trump had offered mixed messages since the Parkland shooting.

"Which Donald Trump is going to show up?" she asked. "Will it be the one who sympathized with the Parkland students he brought to the White House, the one who met with members of the Senate ... or the one who had burgers" with NRA head Wayne LaPierre.

Several groups announced plans to protest over the weekend. The protesters will include parents of those killed in Parkland and in other shootings.