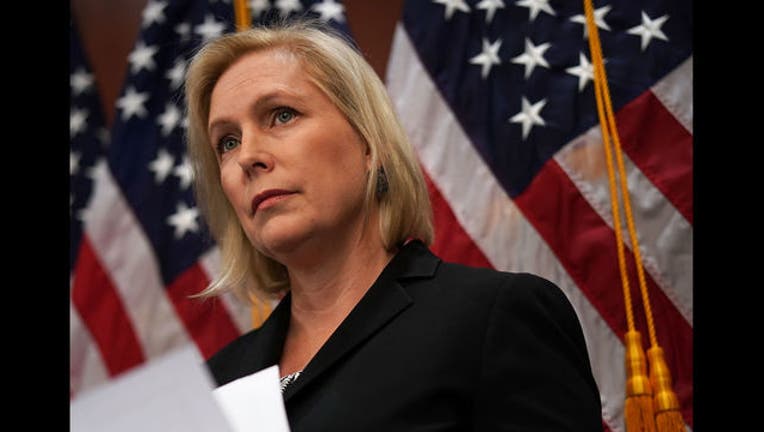 WASHINGTON (AP) -- Pushing into the sexual harassment debate, President Donald Trump laced into Sen. Kirsten Gillibrand on Tuesday, tweeting that the New York Democrat had begged him for campaign contributions in the past and "would do anything" to get them. Democrats accused the president of comments that were crude and worse.

Gillibrand, D-N.Y., who had called for Trump's resignation a day earlier while citing allegations of sexual misconduct, called Trump's attack a "sexist smear attempting to silence my voice."

"I will not be silenced on this issue," Gillibrand insisted. "Neither will the women who stood up to the president yesterday," referring to women who have accused the president of sexual misconduct.

The Democrats were badly misreading the president's comments, said Trump spokeswoman Sarah Huckabee Sanders. "There's no way" his tweet was sexist, she said, and only people with their minds in the gutter would read anything sexual into it.

Standing up for Gillibrand, Sen. Elizabeth Warren, D-Mass., tweeted to the president: "Are you really trying to bully, intimidate and slut-shame (at)SenGillibrand? Do you know who you're picking a fight with? Good luck with that, (at)realDonaldTrump. Nevertheless, (hash)shepersisted."

The phrase "she persisted" went viral earlier this year after Senate Majority Leader Mitch McConnell silenced Warren in the chamber as she tried to read a letter from Coretta Scott King about Attorney General nominee Jeff Sessions.

Trump's tweet Tuesday did not directly address sexual harassment, but said of Gillibrand: "Lightweight Senator Kirsten Gillibrand, a total flunky for Chuck Schumer and someone who would come to my office "begging" for campaign contributions not so long ago (and would do anything for them), is now in the ring fighting against Trump. Very disloyal to Bill & Crooked-USED!"

A day earlier, Gillibrand said Trump should resign because there were credible accusations against him. And barring that, she said, "Congress should investigate the multiple sexual harassment and assault allegations against him."

Hours later, Hawaii Sen. Mazie Hirono also called for the president to step down, declaring that Trump's "tweet against Kirsten was just another example of his misogyny."

"He is a liar. He is an admitted sexual predator and the only thing that will stop him is his resignation," Hirono said. "He not only owes Kirsten an apology, he owes an apology to our entire country, particularly the women in this country."

Rep. Eric Swalwell, D-Calif., called it "an ugly and suggestive tweet, and we all know what he was trying to say there, and it is beneath the office of the presidency."

The criticism of Trump largely came from one side of the aisle. Republicans largely remained silent about the tweet, with Arizona Sen. Jeff Flake, a frequent Trump critic, being an exception, saying he "didn't think it was appropriate at all."

More than a dozen women came forward during last year's campaign, many in the wake of the "Access Hollywood" tape in which Trump is heard bragging about committing sexual assault, to say that the celebrity businessman had harassed them.

With each day seeming to bring new headlines that force men from positions of power, four of Trump's accusers re-upped their claims Monday, believing the national movement on sexual harassment should force change at the White House too.

Trump has denied the claims. In a heated exchange with reporters in the White House briefing room on Monday, press secretary Sanders steadfastly dismissed accusations against the Republican president and suggested the issue had been decided in Trump's favor on Election Day.

Sanders also promised that the White House would provide a list of eyewitnesses and corroborating evidence to exonerate Trump. Nearly 24 hours later, the White House sent along an email that, citing news reports that quote witnesses, offered rebuttals to two of the accusations.

Trump donated $4,800 to Gillibrand's Senate campaign in 2010, according to federal campaign finance records. Before launching his presidential campaign, Trump frequently bestowed donations on politicians of both parties.