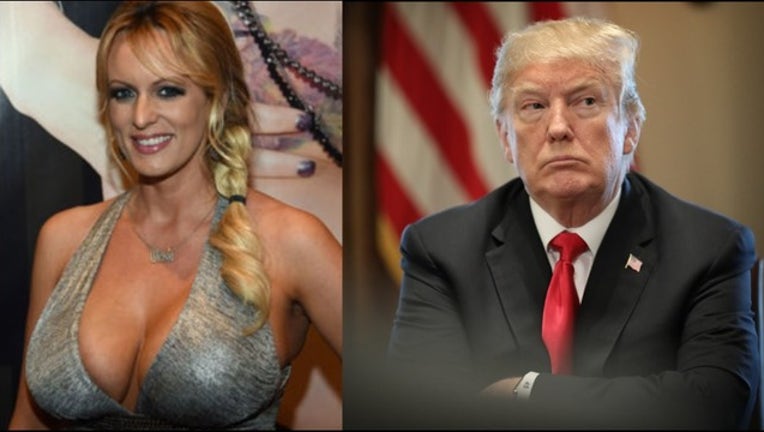 ABOARD AIR FORCE ONE (AP) — President Donald Trump said Thursday he didn't know about the $130,000 payment his personal attorney made to Stormy Daniels, issuing a firm denial in his first public comments about the adult-film actress who alleges she had an affair with him.

Asked aboard Air Force One whether he knew about the payment, Trump said flatly: "No."

Her attorney, Michael Avenatti, tweeted in response to Trump on Thursday that, "We very much look forward to testing the truthfulness of Mr. Trump's feigned lack of knowledge concerning the $130k payment as stated on Air Force One."

"As history teaches us," he added, "it is one thing to deceive the press and quite another to do so under oath."

Avenatti then told The Associated Press: "I don't believe the feigned denial, but we're going to put it to the test."

One of several women pursuing potentially damaging legal actions, Daniels has kept up the highest profile in the news, helped by a punchy Twitter feed, a widely viewed interview on "60 Minutes" and a camera-ready attorney who has become a fixture on cable news.

Daniels, whose real name is Stephanie Clifford, has offered to return the $130,000 as she tries to "set the record straight." She's said she had sex with Trump once in 2006 and their relationship continued for about a year. Trump married his current wife, Melania, in 2005, and their son Barron was born in 2006.

Daniels argues the non-disclosure agreement is legally invalid because it was only signed by her and Cohen, not by Trump.

Earlier this week, Trump asked a federal judge to order private arbitration in the case. Trump and Cohen filed papers in federal court in Los Angeles asking a judge to rule that the case must be heard by an arbitrator instead of a jury.

Avenatti said they would oppose private arbitration, arguing it should be heard by the American public.