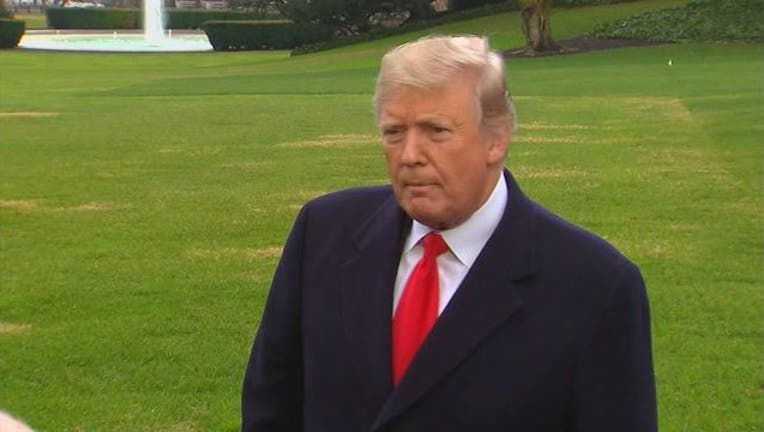 WASHINGTON (AP) -- Fighting for advantage in the government shutdown battle, President Donald Trump aimed to use a prime-time address Tuesday to convince Americans he needs billions of dollars from Congress for his long-promised border wall to resolve security and humanitarian problems he contends have reached a crisis pitch. He was sure to face intense pushback from Democrats.

Trump also plans a personal visit to the Mexican border on Thursday as he tries to put pressure on newly empowered Democrats in the shutdown standoff. His Tuesday evening remarks were to be followed by a televised rebuttal from House Speaker Nancy Pelosi and Senate Minority Leader Chuck Schumer, who strongly oppose the wall and have repeatedly called on Trump to reopen shuttered portions of the government while border negotiations continue.

Trump has been discussing the idea of declaring a national emergency to allow him to move forward with the wall without getting congressional approval for the $5.7 billion he's requested. But the president was not expected to make that declaration Tuesday night, said two people familiar with the White House plans, although it was possible he could change course.

Such an emergency declaration would represent a dramatic escalation of the dispute and would immediately draw legal challenges. It could potentially unlock military dollars for building the wall. While Trump has previously described the situation on the border that way -- including when he directed active duty troops there ahead of the midterm elections-- he has never signed an official proclamation.

He will meet with Republican lawmakers at the Capitol on Wednesday.

Before the speech, Trump dispatched Vice President Mike Pence to Capitol Hill, where he urged House Republicans to "stand strong" in support and said the White House wants to negotiate, according to people familiar with the conversation.

He also told the group that Trump won't retreat. "That pickup ain't got reverse in it," he said.

With his use of a formal White House speech instead of his favored Twitter blasts, Trump is embracing the ceremonial trappings of his office as he tries to exit a political quagmire of his own making. For weeks he has dug in on a signature campaign promise to his base voters, the pledge to build an impregnable "beautiful" wall along the U.S.-Mexico border. But now his self-proclaimed deal-making skills are being put to the test.

The partial government shutdown reached its 18th day, making the closure the second-longest in history. Hundreds of thousands of federal workers are going without pay, and government disruptions are hitting home with everyday Americans. But Trump has not budged on his demands for $5.7 billion in wall funding, and Democrats have not moved from their opposition, while many Republicans watch anxiously from the sidelines.

Sen John Thune of South Dakota, the GOP whip, said he doesn't think the emergency declaration is the right move and "I prefer that we get this resolved the old-fashioned way."

In recent days, Trump, who has long railed against illegal immigration at the border, has also seized on humanitarian concerns to argue there is a broader crisis that can only be solved with a wall. Critics say the security risks are overblown and the administration is at least partly to blame for the humanitarian situation.

The number of illegal border crossings is down from 1.6 million in 2000 to less than 400,000 last year. But the number of families coming over the border has risen sharply, putting a strain on health care and immigration services that came into sharp focus with the deaths of two migrant children. Some say Trump's hardline policies are slowing processing for migrants, creating an overwhelming bottleneck at the border.

After meeting with Democrats over the weekend, the White House issued a series of budget demands, including a new request for $800,000 for humanitarian needs. But mostly Trump still wants his wall, which Democrats describe as immoral as well as no solution to illegal immigration.

Emphasizing that he's not abandoning his security argument, Trump said in a fundraising email Tuesday: "I want to make one thing clear to Chuck Schumer and Nancy Pelosi: Your safety is not a political game or a negotiation tactic!"

The White House requested eight minutes to make Trump's case on television. It invited representatives from cable news outlets to a White House lunch with Trump ahead of the address, a gesture that is typically reserved for the lead-up to State of the Union speeches. Over Caesar salad and iced tea, Trump projected confidence that his strategy was working, Fox News Channel's Bret Baier reported.

Leaning on Senate Republicans, some of whom are growing anxious about the impact of the shutdown, Pelosi said the House would begin passing individual bills this week to reopen shuttered federal agencies, starting with the Treasury Department to ensure Americans receive their tax refunds.

In a pre-emptive move, the White House said Monday that tax refunds would be paid despite the shutdown. That shutdown exemption would break from past practice and could be challenged.

Some two dozen Republicans are expected to cross over this week and vote for the Democratic bills to re-open government, said a GOP aide who was not authorized to speak publicly. But GOP leaders believe they can avoid more defections to prevent Pelosi from gaining a veto-proof majority.

With Trump heading to the border on Thursday, few saw a speedy path to resolution for the partial shutdown, which has furloughed 380,000 federal workers and forced an additional 420,000 to work without pay. Federal workers still on the job apparently will miss this week's paychecks.

Trump has said he can relate to the plight of the federal workers who aren't getting paid, though he acknowledged they will have to "make adjustments."