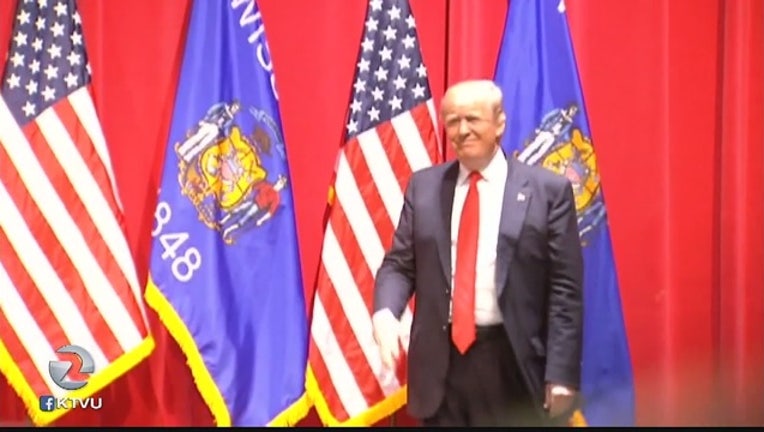 HOLLYWOOD, Fla. (AP) -- Donald Trump's chief lieutenants told skeptical Republican leaders Thursday the GOP front-runner has been "projecting an image" so far in the 2016 primary season and "the part that he's been playing is now evolving" in a way that will improve his standing among general election voters.

The message, delivered behind closed doors in a private briefing, is part of the campaign's intensifying effort to convince party leaders Trump will moderate his tone in the coming months to help deliver big electoral gains this fall despite his contentious ways.

Even as his team pressed Trump's case, he raised fresh concern among some conservatives by speaking against North Carolina's "bathroom law," which directs transgender people to use the bathroom that matches the sex on their birth certificates. Trump also came out against the federal government's plan to replace President Andrew Jackson with the civil-rights figure Harriet Tubman on the $20 bill.

The developments came as the GOP's messy fight for the White House spilled into a seaside resort in south Florida. While candidates in both parties fanned out across the country before important primary contests in the Northeast, Hollywood's Diplomat Resort & Spa was transformed into a palm-treed political battleground.

Trump's newly hired senior aide, Paul Manafort, made the case to Republican National Committee members that Trump has two personalities: one in private and one onstage.

The Associated Press obtained a recording of the closed-door exchange.

"He gets it," Manafort said of Trump's need to moderate his personality. "The part that he's been playing is evolving into the part that now you've been expecting, but he wasn't ready for, because he had first to complete the first phase. The negatives will come down. The image is going to change."

The message was welcomed by some party officials but criticized by others who suggested it raised doubts about his authenticity.

"He's trying to moderate. He's getting better," said Ben Carson, a Trump ally who was part of the GOP's front-runner's RNC outreach team.

There was evidence of drama on the Democratic side as well.

Sanders said the results in the South "distort reality" because they came from the country's "most conservative region."

Don Fowler of South Carolina, a former chairman of the Democratic National Committee, and other Clinton supporters told Sanders in a letter that "our national Democratic leaders" should "invest in our races and causes -- to amplify our voices, not diminish them."

Yet as Clinton's grasp on the Democratic nomination tightens, Trump's overwhelming Republican delegate lead has done little to calm concerns from GOP leaders, gathered at the resort for the party's meeting.

As Trump continues to rail against "a rigged" nomination process, he sent Manafort and his newly hired political director, Rick Wiley, to help improve relationships with party officials at the meeting.

Trump's team drew on political history to make the case that he can win a general election.

Wiley cited polls that found Ronald Reagan and George H.W. Bush struggling in presidential campaigns before they won. Wiley also said Trump could compete and even win in Democratic strongholds such as Pennsylvania, Michigan, Wisconsin -- and even deeper-blue states such as New Jersey, Oregon and Washington.

"He might not win some of these blue states, but you can make the Democrats spend money and time," Wiley said.

Trump's team also signaled to RNC members a fresh willingness to dip into the New York real estate mogul's personal fortune to fund his presidential bid, in addition to helping the national committee raise money, a promise that comes just as Trump launches his first big television advertising campaign in a month.

His campaign reserved about $2 million worth of air time in soon-to-vote Pennsylvania and Indiana, advertising tracker Kantar Media's CMAG shows.

"He's willing to spend what is necessary to finish this out. That's a big statement from him," Manafort said in the briefing.

Trump is increasingly optimistic about his chances in five states holding primary contests Tuesday: Rhode Island, Connecticut, Pennsylvania, Delaware and Maryland. He is now the only Republican candidate who can possibly collect the 1,237-delegate majority needed to claim the nomination before the party's July convention.

Chief rival Ted Cruz hopes Trump will fall short of a nomination-clinching delegate majority so that he can turn enough delegates to his side at the convention to give him the prize.

The political posturing came as Trump sparked new criticism by addressing the debate over which bathrooms transgender people should use.

Speaking at a town-hall event on NBC's "Today" show Thursday, Trump said North Carolina's bathroom law has caused unnecessary strife and transgender people should be able to choose which bathroom to use.

"There have been very few complaints the way it is," Trump said. "People go, they use the bathroom that they feel is appropriate."

Cruz lashed out at Trump's "support of grown men using women's restrooms." The Texas senator called Trump's position "a reckless policy that will endanger our loved ones."

Trump also said the plan to swap Jackson for Tubman on the $20 bill is an act of "pure political correctness."

Trump called Tubman "fantastic" but said he'd prefer to leave Jackson on the bill and place Tubman's image on another denomination: "Maybe we do the $2 bill," he said.