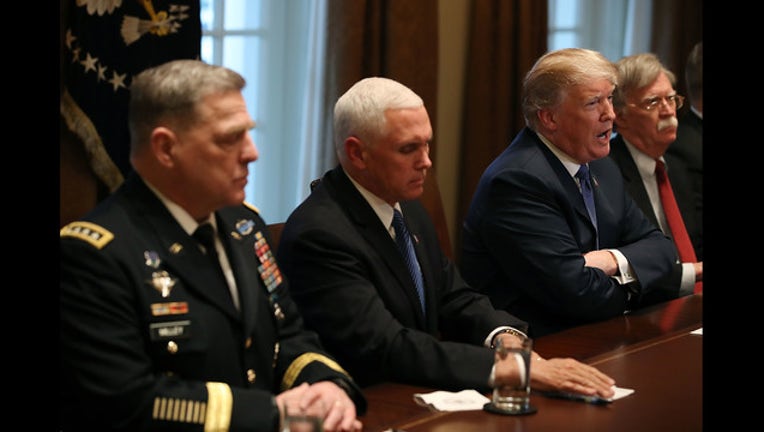 U.S. President Donald Trump speaks during a briefing from senior military leaders regarding Syria, in the Cabinet Room, on April 9, 2018 in Washington, DC. (Photo by Mark Wilson/Getty Images)

WASHINGTON (AP) -- President Donald Trump on Monday threatened an imminent military strike against Syria, vowing to respond "forcefully" to Saturday's apparent chemical weapons attack on civilians and warning that Russia or any other nation found to share responsibility will "pay a price."

As he began an evening meeting with military leaders at the White House, Trump promised to "make a decision tonight or very shortly thereafter." He said: "We have a lot of options militarily, and we'll be letting you know pretty soon. Probably after the fact."

The White House sharply rejected any suggestion that Trump's own words about pulling U.S. troops out of Syria had opened the door for the attack, which killed more than 40 people, including children.

Trump, asked at midday whether Russian President Vladimir Putin bore any responsibility for the weekend attack, responded: "He may, yeah, he may. And if he does it's going to be very tough, very tough." He added: "Everybody's gonna pay a price. He will. Everybody will."

Then, during the meeting with top military leaders, he said the weekend assault "will be met and it will be met forcefully." Those at the meeting included Defense Secretary Jim Mattis and the chairman of the Joint Chiefs of Staff, Gen. Joseph Dunford.

Amid the tough talk at the White House, the U.S. military appeared to be in position to carry out any attack order. A Navy destroyer, the USS Donald Cook, was underway in the eastern Mediterranean after completing a port call in Cyprus. The guided missile destroyer is armed with Tomahawk cruise missiles, the weapon of choice in a U.S. attack one year ago on an airfield in Syria following an alleged sarin gas attack on civilians.

The Russian military, which has a presence in Syria as a key Assad ally, said its officers had visited the weekend site in a suburb of Damascus, the Syrian capital, and found no evidence to back up reports of poison gas being used. Russia's U.N. ambassador, Vassily Nebenzia, accused Washington of deliberately stoking international tensions by threatening Russia in a tone "beyond the threshold of what is acceptable, even during the Cold War."

Trump said there was little question that Syria was responsible for the apparent weekend attack, although the government of President Bashar Assad denied it. "To me there's not much of a doubt, but the generals will figure it out," Trump said.

Emphatic in his condemnation of the apparent gas attack, Trump noted graphic pictures of the dead and sickened, calling the assault "heinous," `'atrocious," `'horrible" and "barbaric."

Fielding questions at the White House, Trump press secretary Sarah Sanders said it would be "outrageous" to say that Trump's recent announcement that he intends to remove all U.S. forces from Syria in the coming months had emboldened Assad. "I think that it is outrageous to say that the president of the United States green-lit something as atrocious as the actions that have taken place over the last several days," she said.

Mattis, in separate remarks at the Pentagon, also suggested Moscow bore some blame. He criticized Russia for what he suggested was its failure to ensure the elimination of Syria's chemical weapons arsenal under terms of a 2013 agreement.

Trump said no action was "off the table" and also conferred with Vice President Mike Pence and his new national security adviser, John Bolton. Monday was the first day on the job for Bolton, who has previously advocated military action against Syria.

The United States, meanwhile, urged the U.N. Security Council to adopt a resolution that would condemn the continuing use of chemical weapons in Syria "in the strongest terms" and establish a new body to determine responsibility for chemical attacks. The draft resolution, obtained by The Associated Press, was circulated ahead of an emergency Security Council meeting.

An American official said the U.S. was discussing with allies whether they would participate in a retaliatory strike. If Trump decides to proceed quickly, the most likely partner would be France rather than Britain, because of concerns about obtaining permission from Parliament, said the official, who wasn't authorized to discuss the planning publicly and requested anonymity.

Acting Secretary of State John Sullivan spoke by phone Monday with British Foreign Secretary Boris Johnson. Sullivan and Johnson agreed that based on reports in the media and from the ground, "this attack bore hallmarks of previous chemical weapons attacks by the Assad regime," the British foreign office said.

The White House deliberations came as Russia and the Syrian military blamed Israel for a pre-dawn missile attack on a major air base in central Syria, saying Israeli fighter jets launched missiles from Lebanon's air space. A group that monitors Syria's civil war said the airstrikes killed 14 people, including Iranians active in Syria.

Syria's state news agency SANA initially said that attack on the T4 air base was likely "an American aggression," but Pentagon spokesman Christopher Sherwood quickly denied the United States was behind the strike and the agency then dropped the accusation, blaming Israel instead.

As U.S. officials consider whether and how to respond, they are looking at what type of chemical agent might have been used. When Trump ordered airstrikes last year after a chemical weapons attack, it was a response to the use of sarin gas, which is banned by the Chemical Weapons Convention that Syria has signed. An attack with chlorine, which can be used as a weapon but is not outright banned by the treaty, could raise precedent issues, as there have been numerous recent allegations of chlorine attacks in Syria that have drawn no response from the Trump administration.