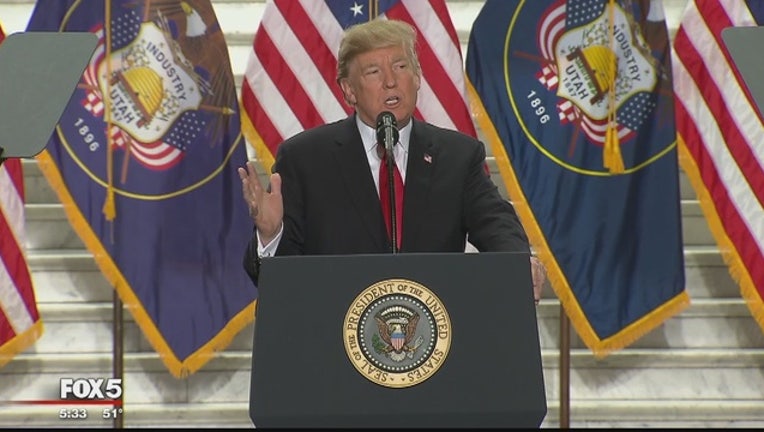 NEW YORK (AP) -- President Donald Trump returned to a favorite target Friday, saying that Amazon.com should be charged more by the U.S. Postal Service for the packages it sends around the world.

Amazon has been a consistent recipient of Trump's ire. He has accused the company of failing to pay "internet taxes," though it's never been made clear by the White House what the president means by that.

In a tweet Friday, Trump said Amazon should be charged "MUCH MORE" by the post office because it's "losing many billions of dollars a year" while it makes "Amazon richer."

Amazon lives and dies by shipping, and an increase in the rates it pays could certainly do some damage. Amazon sends packages via the post office, FedEx, UPS and other services.

In the seconds after the tweet, shares of Amazon, which had been trading higher before the opening bell, began to fade and went into negative territory. The stock closed down more than 1 percent Friday. Broader markets also slipped.

Amazon was founded by Jeff Bezos, who also owns The Washington Post. The Post, as well as other major media, has been labeled as "fake news" by Trump after reporting unfavorable developments during his campaign and presidency.

The Seattle company did not respond to a request for comment Friday. A spokeswoman for the Postal Service said, "We're looking into it."

Between July and September, Amazon paid $5.4 billion in worldwide shipping costs, a 39 percent increase from the same period in the previous year. That amounts to nearly 11 percent of the $43.7 billion in total revenue it reported in that same period.

In 2014, Amazon reached a deal with the Postal Service to offer delivery on Sundays.

Trump has also attacked U.S. corporations not affiliated in any way with the news media.

Just over a year ago, he tweeted "Boeing is building a brand new 747 Air Force One for future presidents, but costs are out of control, more than $4 billion. Cancel order!"

Shares of Boeing Co. gave up almost 1 percent when trading opened that day, but recovered.

Several days later, and again on Twitter, he said that Lockheed-Martin, which is building the F-35 fighter jet, was "out of control."  Its shares tumbled more than 5 percent, but they too recovered.

The Postal Service has lost money for 11 straight years, mostly because of pension and health care costs.

One part of the operation that is not suffering, however, is shipping and packages, which handles Amazon and other online orders from retailers.  In the year that ended Sept. 30, the postal service reported higher-than-expected revenue of $19.5 billion, "due to e-commerce growth."

The post office does not break down what is driving that growth, but online orders from retailers, particularly Amazon.com, has revolutionized the way goods are bought and delivered. Analysts at Bain & Co. expected Amazon to capture 50 percent of all online shopping growth during the holiday shopping season.

Amazon has taken some steps toward becoming more self-reliant in shipping. Earlier this year it announced that it would build a worldwide air cargo hub in Kentucky, about 13 miles southwest of Cincinnati.

Shares of Amazon.com Inc. slipped 1.4 percent Friday to close at $1,169.47. The Seattle company's stock is up more than 57 percent this year and surpassed $1,000 each for the first time in April.