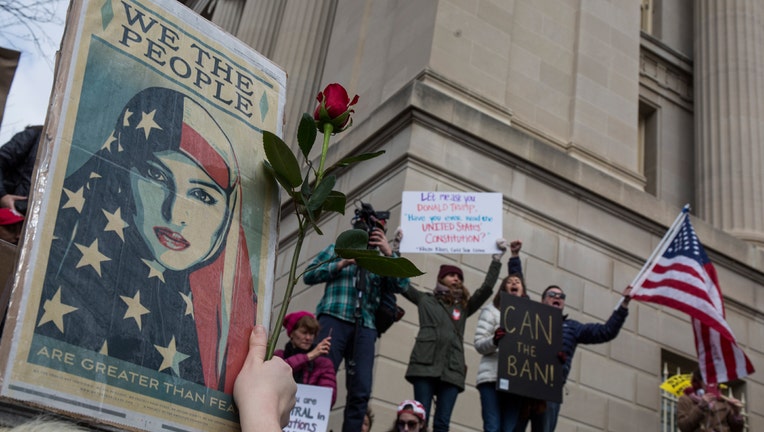 RICHMOND, Va. - After the U.S. Supreme Court upheld President Donald Trump’s ban on travelers from several predominantly Muslim countries in 2018, the ruling appeared to shut down legal challenges that claimed the policy was rooted in anti-Muslim bias.

But a federal appeals court in Richmond is set to hear arguments from civil rights groups hoping to keep the challenges alive.

The 4th U.S. Circuit Court of Appeals will hear arguments Tuesday in three lawsuits filed by U.S. citizens and permanent residents whose relatives have been unable to enter the U.S. because of the travel ban, which was first imposed shortly after Trump took office in January 2017.

The court is being asked to decide whether a federal judge in Maryland made a mistake when he refused to dismiss constitutional claims made in a lawsuit filed by the International Refugee Assistance Project despite a 2018 U.S. Supreme Court ruling in a Hawaii case that found the travel ban “a legitimate grounding in national security concerns.”

The Justice Department argues the high court’s ruling effectively puts an end to the legal challenges. In a 5-4 ruling, a sharply divided Supreme Court found that the travel ban was within the considerable authority U.S. presidents have over immigration and their responsibility for keeping the nation safe. The court rejected claims that the policy was rooted in anti-Muslim bias based in large part on Trump’s own tweets and public statements, including his call during the presidential campaign for “a complete and total shutdown of Muslims entering the United States.”

Trump has said the ban is aimed at making the U.S. safer from potentially hostile foreigners.

The Trump administration is asking the 4th Circuit to dismiss the lawsuits.

But the plaintiffs’ attorneys say the Supreme Court merely rejected a preliminary injunction to block the travel ban and did not decide the merits of the constitutional claims. The plaintiffs allege the travel ban violates several constitutional rights, including the First Amendment’s Establishment Clause prohibiting the government from favoring one religion over another.

“The Trump administration has supplied ample and damning evidence of its discriminatory intent, time and time again, so we’re hopeful that any court — any fair-minded observer — will see it the way we do, that it is a Muslim ban that’s aimed at the Muslim community and Islam,’” said Gadeir Abbas, a senior litigation attorney with the Council on American-Islamic Relations.

Federal appeals courts — including the 4th Circuit — had upheld rulings from federal judges who blocked the travel ban from taking effect. But the Supreme Court came to a different conclusion.

The travel ban’s third iteration — now in effect— applies to travelers from Iran, Libya, Somalia, Syria and Yemen. It also affects two non-Muslim countries, keeping out travelers from North Korea and some Venezuelan government officials and their families.

The groups suing the Trump administration say the 4th Circuit is not being asked to decide the merits of the legal challenges. They say they are only asking the appeals court to find — as U.S. District Court Judge Theodore Chuang did — that their lawsuits can move forward to the discovery phase, when they will seek records from the Trump administration on the origins of the ban and how it has been enforced over the last three years.

In rejecting the government’s motion to dismiss the lawsuits, Chuang found that the plaintiffs “have provided detailed allegations for why the (travel ban) is not rationally related to its stated national security interests and is instead grounded in the illegitimate and unconstitutional purpose of disadvantaging Muslims.”

Jonathan Turley, a professor at George Washington University Law School, said that while the Muslim groups can legitimately argue that the Supreme Court did not require outright dismissal of their legal challenges, the high court’s ruling did put a significant crimp in their arguments.

“It strikes me as willful blindness to pretend the opinion did not substantially undermine these cases,” he said. “It’s very difficult to read the Supreme Court opinion and not see considerable support for the arguments of the administration.”

Justin Cox, an attorney with the International Refugee Assistance Project, said Muslim advocates will continue to try to prove that the ban is unconstitutional.

“I understand why they want us to go away,” he said. “But nothing requires us to go away and we are going to keep fighting.”