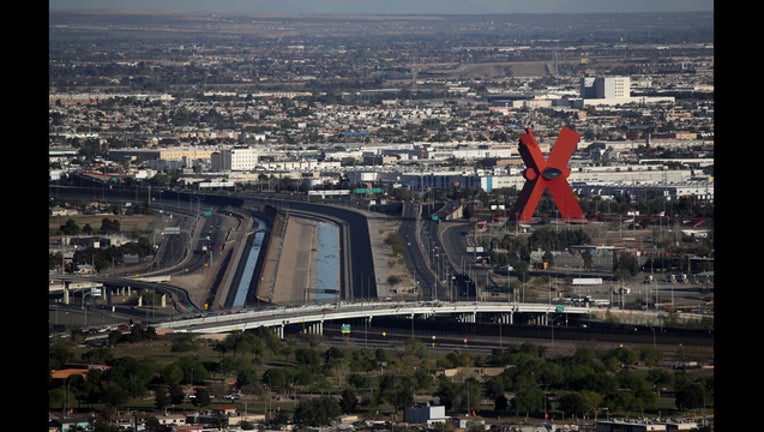 U.S. President Donald Trump has threatened to close the United States border if Mexico does not stem the flow of illegal migrants trying to cross. (Photo by Justin Sullivan/Getty Images)

EL PASO, Texas (AP) -- President Donald Trump's threat to shut down the southern border raised fears Monday of dire economic consequences in the U.S. and an upheaval of daily life in a stretch of the country that relies on the international flow of not just goods and services but also students, families and workers.

Politicians, business leaders and economists warned that such a move would block incoming shipments of fruits and vegetables, TVs, medical devices and other products and cut off people who commute to their jobs or school or come across to go shopping.

"Let's hope the threat is nothing but a bad April Fools' joke," said economist Dan Griswold at the Mercatus Center at George Mason University in Virginia. He said Trump's threat would be the "height of folly," noting that an average of 15,000 trucks and $1.6 billion in goods cross the border every day.

"If trade were interrupted, U.S. producers would suffer crippling disruptions of their supply chains, American families would see prices spike for food and cars, and U.S. exporters would be cut off from their third-largest market," he said.

Trump brought up the possibility of closing ports of entry along the southern border Friday and revisited it in tweets over the weekend because of a surge of Central Americans migrants who are seeking asylum. Trump administration officials have said the influx is straining the immigration system to the breaking point.

Elected leaders from border communities stretching from San Diego to cities across Texas warned that havoc would ensue on both sides of the international boundary if the ports were closed. They were joined by the U.S. Chamber of Commerce, which said such a step would inflict "severe economic harm."

In California's Imperial Valley, across from Mexicali, Mexico, farmers rely on workers who come across every day from Mexico to harvest fields of lettuce, carrots, onions and other winter vegetables. Shopping mall parking lots in the region are filled with cars with Mexican plates.

More than 60 percent of all Mexican winter produce consumed in the U.S. crosses into the country at Nogales, Arizona. The winter produce season is especially heavy right now, with the import of Mexican-grown watermelons, grapes and squash, said Lance Jungmeyer, president of the Fresh Produce Association of the Americas.

He said 11,000 to 12,000 commercial trucks cross the border at Nogales daily, laden with about 50 million pounds of produce such as eggplants, tomatoes, bell peppers, lettuce, cucumbers and berries.

He said a closing of the border would lead to immediate layoffs and result in shortages and price increases at grocery stores and restaurants.

"If this happens -- and I certainly hope it doesn't -- I'd hate to go into a grocery store four or five days later and see what it looks like," Jungmeyer said.

Laredo Mayor Pete Saenz, chairman of the Texas Border Coalition, said a closure would be catastrophic.

"Closing the border would cause an immediate depression in border state communities and, depending on the duration, a recession in the rest of the country," he said.

"Our business would end," said Marta Salas, an employee at an El Paso shop near the border that sells plastic flowers that are used on the Mexican side by families holding quinceaneras, the traditional coming-of-age celebrations.

Salas said her whole family, including relatives who attend the University of Texas at El Paso, would be affected if the border were closed.

"There are Americans who live there. I have nephews who come to UTEP, to grade school, to high school every day," Salas said.

Meanwhile, the Trump administration said Monday as many as 2,000 U.S. inspectors who screen cargo and vehicles at ports of entry along the Mexican border may be reassigned to help handle the surge of migrants. Currently, about 750 inspectors are being reassigned.

That, too, could slow the movement of trucks and people across the border.

The effects were evident Monday: Sergio Amaya, a 24-year-old American citizen who lives in Juarez, Mexico, and attends UTEP, said it normally takes him two minutes to cross the bridge. It took an hour this time.

"The Border Patrol agent said it's going to get worse," Amaya said.

Instead of ensuring the flow of goods across the border, the inspectors are being put to work processing migrants, taking their applications for asylum and transporting them to holding centers.

Homeland Security Secretary Kirstjen Nielsen said the reassignments are necessary to help manage the huge influx that is overloading the system.

"The crisis at our border is worsening, and DHS will do everything in its power to end it," Nielsen said.

In addition to reassigning inspectors, Nielsen has asked for volunteers from non-immigration agencies within her department and sent a letter to Congress requesting resources and broader authority to deport families faster. The administration is also ramping up efforts to return asylum seekers to Mexico.

Apprehensions all along the southern border have soared in recent months, with border agents on track to make 100,000 arrests and denials of entry there in March, more than half of them families with children.