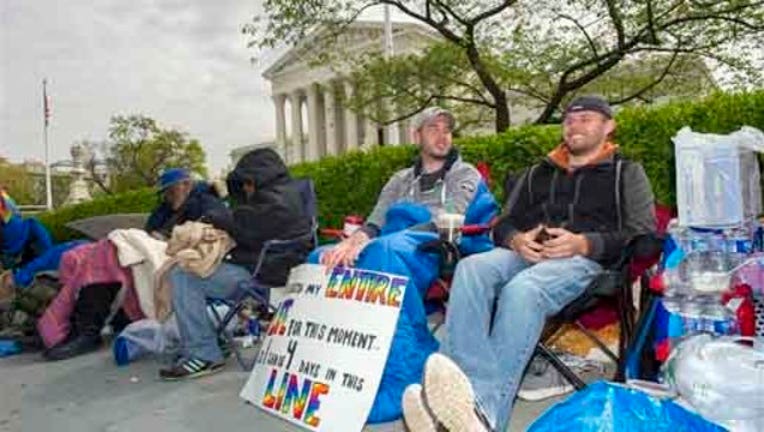 WASHINGTON (AP) — Tuesday is a potential watershed moment for America's gay and lesbian couples. After rapid changes that have made same-sex marriage legal in all but 14 states, the Supreme Court will hear arguments over whether it should be the law of the land.

All eyes will be on the justices for any signals that they are prepared to rule that the Constitution forbids states from defining marriage as the union of a man and a woman. On the sidewalk outside, people have been waiting in line since Friday for prized seats for the historic arguments.

The first state to allow gay and lesbian couples to marry was Massachusetts, in 2004. Even as recently as October, barely a third of the states permitted it. Now, same-sex couples can marry in 36 states and the District of Columbia, a dramatic change in the law that has been accompanied by an equally fast shift in public opinion.

Now that everyone else has weighed in through mountains of legal briefs, the justices get to say, or at least hint, what they will decide. On Tuesday, five lawyers will present arguments over 2½ hours to help the court conclude whether, on this question, the 14 remaining states must join the rest of the country.

The main thrust of the states' case is to reframe the debate.

"This case is not about the best marriage definition. It is about the fundamental question regarding how our democracy resolves such debates about social policy: Who decides, the people of each state or the federal judiciary?" John Bursch, representing Michigan, wrote in his main brief to the court.

Other arguments by the states and more than five dozen briefs by their defenders warn the justices of harms that could result "if you remove the man-woman definition and replace it with the genderless any-two-persons definition," said Gene Schaerr, a Washington lawyer.

The push for same-sex marriage comes down to fairness, said Mary Bonauto, who will argue on behalf of the plaintiffs. The people who have brought their cases to the Supreme Court are "real people who are deeply committed to each other. Yet they are foreclosed from making that commitment simply because of who they are," she told reporters last week.

Arguments made by Bonauto, other lawyers for same-sex couples and more than six dozen supporting briefs have strong echoes of the 1967 Loving v. Virginia case, in which the Supreme Court struck down state bans on interracial marriage. In that case, the justices were unanimous that those bans violated the constitutional rights of interracial couples.

No one expects unanimity this time. But many believe the justices will take the final step toward what gay rights supporters call marriage equality, in part because they allowed orders in favor of same-sex couples to take effect even as the issue made its way through the federal court system.

That was action through inaction, as other judges played a major role over the years. Only 11 states have granted marriage rights to same-sex couples through the ballot or the legislature. Court rulings are responsible for all the others.

Forty-three years ago, the Supreme Court swept away the appeal of two men who wanted to marry in Minnesota in just one sentence: The court dismissed the case of Baker v. Nelson because the justices concluded there was no "substantial federal question" to decide in 1972.

"That did not work out well because the country was not ready to see us in the way it sees us now," said James Esseks, leader of the American Civil Liberties Union's gay rights effort.

More recently, the Supreme Court has advanced rights for gay and lesbian Americans in three decisions dating back to 1996, each written by Justice Anthony Kennedy. In the most recent, in 2013, the justices divided 5-4 and threw out part of the federal Defense of Marriage Act that prevented legally married same-sex couples from receiving a range of benefits. Kennedy, joined by his four more liberal colleagues, explicitly left open the issue now before the court in an opinion that mixed his well-known belief in individual dignity with his views on the important role of the states in American democracy.

Federal refusal to recognize valid same-sex unions "humiliates tens of thousands of children now being raised by same-sex couples. The law in question makes it even more difficult for the children to understand the integrity and closeness of their own family and its concord with other families in their community and in their daily lives," Kennedy wrote.

Justice Antonin Scalia wrote the longest and most acerbic of three dissents in that case. He correctly predicted that people seeking the right to marry and judges hearing those cases would rely on Kennedy's opinion to take the next step and strike down state marriage bans.

Tuesday's courtroom drama will unfold in front of the few hundred people who are lucky enough to score seats. The line began forming on Friday and stretched around the corner by Monday morning, as opponents of same-sex marriage held a news conference in front of the court.

The opponents spoke in favor of legislation, already introduced, that would strip the justices of authority to decide the issue. "We hereby demand that judges cease and desist from undermining the will of the American people," opponent Janet Porter said, reading from one of more than 300,000 proclamations Porter said have been sent to the court and Congress.

A decision is expected in late June.