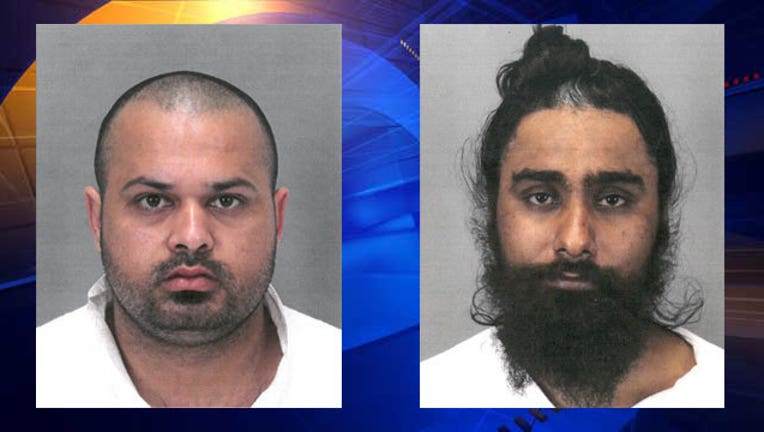 SUNNYVALE, Calif. (KTVU and wires) -- A taxi driver and his roommate allegedly raped an unconscious woman in the cab Sunday evening in Sunnyvale, according to the city's Department of Public Safety.

Navjot Singh, the 29-year-old driver, and his roommate Gurminder Sekhon, 30, were arrested on suspicion of kidnapping and rape. Both men are residents of Santa Clara, public safety officials said.

The incident was first reported at 6:08 p.m. Sunday when witnesses observed the victim being forcibly removed from a checkered cab in the vicinity of North Wolfe and Kifer roads, according to the department.

An investigation indicated that the victim had called a cab after drinking. Police said that after Singh picked her up in the vicinity of El Monte Road and Interstate Highway 280 in Los Altos Hills, the two decided to purchase alcohol and consensually drank it together in the taxi, public safety officials said.

At some point, the victim lost consciousness. When she regained consciousness, she was being sexually assaulted by Sekhon inside the taxi, according to the department.

A struggle ensued and witnesses observed the victim being forcibly removed from the cab, which is when the incident was called in to dispatch, public safety officials said.

An off-duty officer in the area observed the cab driving away and followed it until officers in marked patrol vehicles could conduct a traffic stop.

Investigating officers later determined that at some point while the victim was unconscious, Singh had picked up Sekhon and both men had participated in the rape, according to the department.

The taxi Singh was driving is affiliated with Yellow Cab of Silicon Valley in San Jose, according to Capt. Jeffrey Hunter.

Yellow Cab of Silicon Valley could not be immediately reached for comment.

This case remains under investigation. Anyone with additional information is encouraged to call Detective Liz Nguyen at (408) 730-7120.