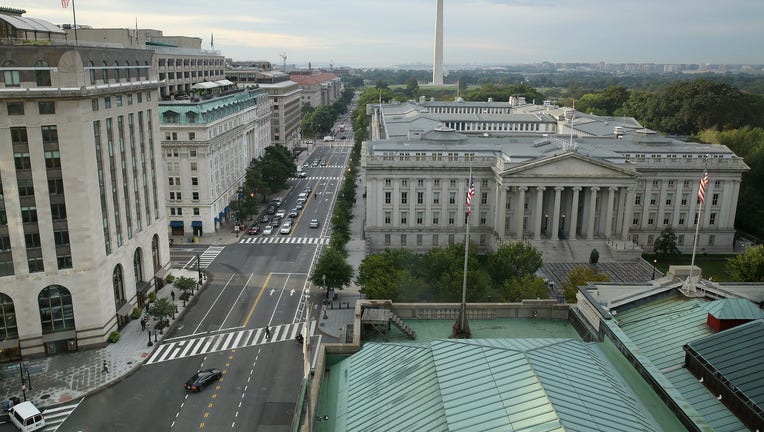 The U.S. Treasury Building as seen from the Bank of America offices. (Photo by Chip Somodevilla/Getty Images)

WASHINGTON - Hackers broke into the networks of federal agencies including the Treasury and Commerce departments as U.S. government officials said Sunday that they were working to identify the scope of the breach and to fix the problem.

The FBI and the Department of Homeland Security’s cybersecurity arm are investigating.

The hacks were revealed just days after a major cybersecurity firm disclosed that foreign government hackers had broken into its network and stolen the company’s own hacking tools. Many experts suspect Russia as responsible for the attack against FireEye, a major cybersecurity player whose customers include federal, state and local governments and top global corporations.

There was no immediate connection between the attacks, and it wasn’t immediately clear if Russia was also responsible for the hack of the Treasury Department, which was first reported by Reuters. National Security Council spokesperson John Ullyot said in a statement that the government was “taking all necessary steps to identify and remedy any possible issues related to this situation.”

President-elect Joe Biden introduced the nominees for his cabinet.

The government’s Cybersecurity and Infrastructure Security Agency said separately that it has been working with other agencies “regarding recently discovered activity on government networks. CISA is providing technical assistance to affected entities as they work to identify and mitigate any potential compromises.”

President Donald Trump last month fired the director of CISA, Chris Krebs, after Krebs vouched for the integrity of the presidential election and disputed Trump’s claims of widespread electoral fraud.

Federal government agencies have long been attractive targets for foreign hackers. Hackers linked to Russia were able to break into the State Department’s email system in 2014, infecting it so thoroughly that it had to be cut off from the internet while experts worked to eliminate the infestation.

Reuters earlier reported that a group backed by a foreign government stole information from Treasury and a Commerce Department agency responsible for deciding internet and telecommunications policy. Intelligence agencies are reportedly concerned that other agencies were hacked using similar tools.

The Treasury Department deferred comment to the National Security Council. A Commerce Department spokesperson confirmed a “breach in one of our bureaus” and said “we have asked CISA and the FBI to investigate.”

Last Tuesday, prominent U.S. cybersecurity firm FireEye said that foreign government hackers with “world-class capabilities” broke into its network and stole offensive tools it uses to probe the defenses of its thousands of customers. Those customers include federal, state and local governments and top global corporations.

The hackers “primarily sought information related to certain government customers,” FireEye CEO Kevin Mandia said in a statement, without naming them. He said there was no indication they got customer information from the company’s consulting or breach-response businesses or threat-intelligence data it collects.

FireEye responded to the Sony and Equifax data breaches and helped Saudi Arabia thwart an oil industry cyberattack — and has played a key role in identifying Russia as the protagonist in numerous aggressions in the burgeoning netherworld of global digital conflict.

Neither Mandia nor a FireEye spokesperson said when the company detected the hack or who might be responsible. But many in the cybersecurity community suspect Russia.