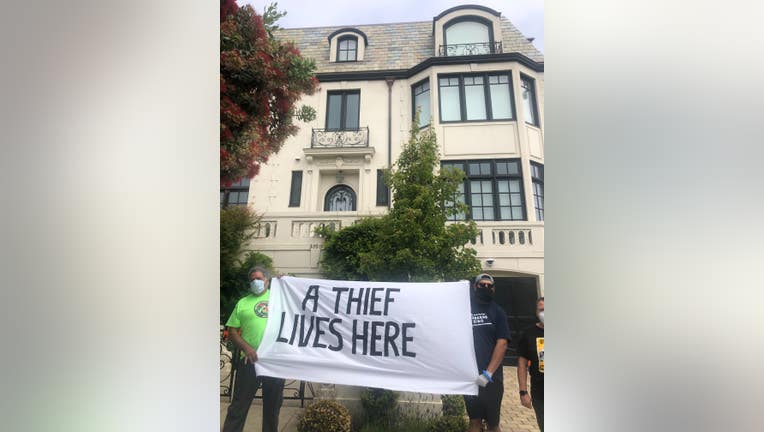 SAN FRANCISCO - Uber drivers held a protest outside the company’s CEO’s house on Wednesday to demand labor protections and oppose a ballot measure that would force them to remain independent contractors.

The same day, California Attorney General Xavier Becerra announced his plan to file a motion for temporary injunction of the ballot measure. If granted, the injunction would force Uber to categorize workers as employees, and drivers would gain basic labor protections, like paid sick leave and a minimum wage.

Protestors, organized with the group Gig Workers Rising, drove a car caravan through the Marina district of San Francisco before parking outside of CEO Dara Khosrowshahi’s house Wednesday. They left notes detailing their frustrations and complaints with the company.

"What companies like Lyft and Uber and other gig companies do is they say, ‘Oh, okay, this whole minimum wage thing, labor law...it works for every other profession and thing out there. But we want exemption from that,’” driver Edan Alva, 50, of Alameda said. “That is essentially an attempt to legitimize and to legislate labor theft.

Mekela Edwards, 49, of Oakland, a member of We Drive Progress and an Uber driver,  said that she feels the protest went well, and was happy to be able to stay in her car.

“I think the most effective thing was that we left that banner that said ‘A Thief Lives Here,’” she said of a sign that demonstrators left outside Khosrowshahi's home. 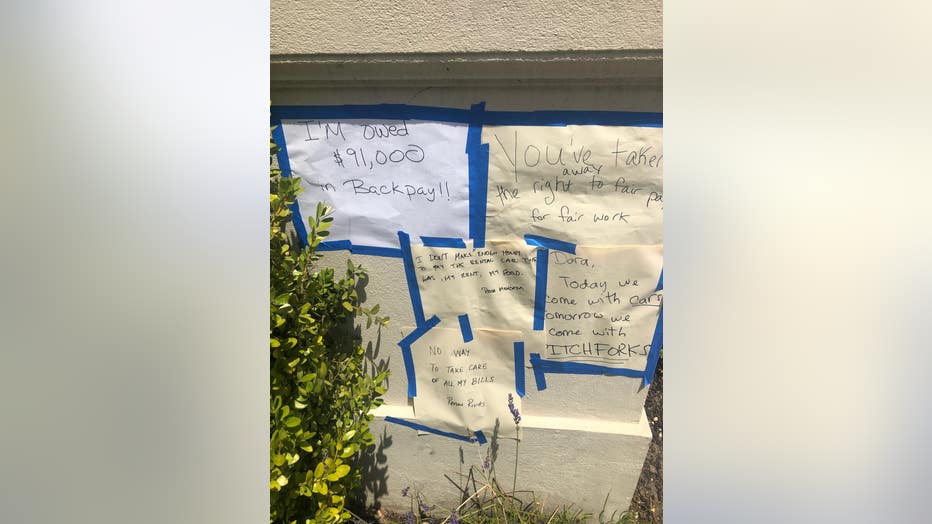 Alva said that when Uber drivers are classified as independent contractors, they're forced to take on all the risks of their work with no protections, and that their work is, in many cases, the only asset they have.

“That's the only thing these people have,” Alva said. “They don't have money, they don't have investment. They only have the work. And they're (Uber) telling them, 'You know, what? We'll take part of the value of this work as profit for us. You guys stay with just what allows you to exist while you're working. The moment you stop working, we really don't care about you anymore.'”

Protect App-Based Drivers and Services, a coalition funded by Uber, Lyft and Doordash, that supports the pro-independent contractor ballot measure, said in a statement that it “expressed outrage today after learning that the state Attorney General plans to file a preliminary injunction asking a judge to force app-based drivers to be employees. This action claims to help drivers, yet drivers by a 4:1 margin have repeatedly said they prefer the flexibility that comes with being an independent contractor.”

Drivers interviewed did not take issue with the flexibility of working as independent contractors, but rather the lack of a living wage. Many Uber drivers report making below minimum wage. They also want basic labor protections protections like sick leave, healthcare and unemployment insurance. Uber does not pay into California’s unemployment fund because drivers are classified as independent contractors.

Of Becerra's temporary injunction, Alva said, “If that is true, this is amazing. It’s what I expect a government to do for its people. Kind of like if I would try to push a ballot measure that enables me to go into Uber's offices and rob them. I don't think that would go well. Even if I got sufficient support for it.”

Edwards said she stopped driving for Uber in March because she was scared for her health. She has asthma and underlying medical conditions, and her doctor said it wouldn’t be safe due to the coronavirus pandemic.

“Thank goodness I live in California, where, you know, Covered California helps us with our medical insurance and things like that,” she said. “But I think the reason why we're having this rally today, and the reason why I'm involved is because we are workers, and we represent the company.”

Edwards said that she had filed for unemployment, but was having difficulty with her application, and is not sure if and when she will receive benefits. In California, independent contractors and self-employed people are eligible to receive Pandemic Unemployment Assistance (PUA), which serves Californians who are not eligible for standard unemployment benefits.