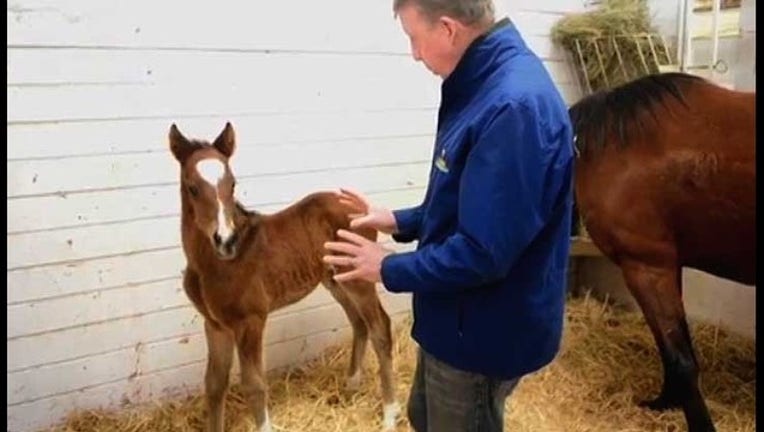 VACAVILLE, Calif. (KTVU) -- On the Victory Rose thoroughbred farm near Vacaville, they have had a curious problem with some newborn horses -- a problem that breeders call maladjusted foals.

"They'll walk into a corner of a stall and they don't understand why they can't just keep walking," she said. "They try to walk up the edge of the wall. They really have no clue of their surroundings."

The foals also do not recognize their mothers or nurse. In the wild they would die.

Dr. John Madigan -- a distinguished professor of veterinary science and expert in equine neonatal health – says veterinarians use to think it was lack of oxygen at birth but research has ruled that out.

Last year, he realized maladjusted foal symptoms reminded him of children's autism symptoms. He thought he would run it by a fellow colleague.

"I'm wondering do you think autism could have anything to do with the failure of transition to consciousness at birth?" he said.

The foal's "transition to consciousness" from in the womb to the world outside occurs during the squeezing in the birth canal.

Dr. Madigan discovered that by squeezing with a rope harness for about 20 minutes, simulating the time spent in the birth canal, the foal's behavior improved.

When he loosened the rope, within minutes the foal got up and went to its mother and nursed.

It appears that by squeezing the foal it seems to turn on an evolutionary necessary switch in the brain, waking the foal up. Could this work in children with autism?

"There are many differences between the onset and progression of the foal syndrome and human autism," he said.

But he says he is now discovering intriguing similarities.

In horses, birthing pressure reduces hormones called neurosteroids . They quiet down the unborn foal in the womb.

Researchers say too much of the hormone after birth causes maladjustment symptoms. Could this be happening in humans?

"The prediction is they would work in a very similar manner" Pessah said.

More study needs to be done and right now U-C Davis is beginning a study of 1800 families for the first time asking if autism's brain mis-wiring may be at least in part caused by these hormones before or during birth. Though, doctors are cautionious.

"I don't think there's going to be, unfortunately, the magic bullet," Pessah said. "But certainly as scientists we need to follow the leads that seem credible to us."