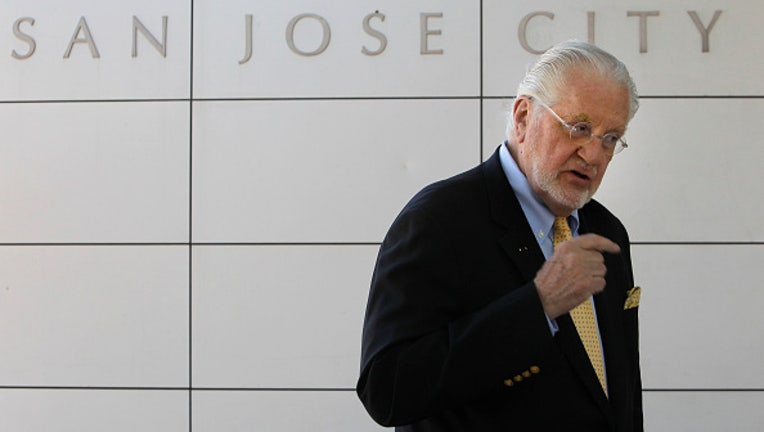 Attorney Joe Cothett with the lawfirm Cotchett, Pitre and McCarthy in front of City Hall in San Jose, Calif. on Tuesday June 18, 2013, filed the lawsuit in Federal Court this morning on behalf of the City of San Jose. The City of San Jose has filed a

The building, located at 333 Golden Gate Ave., will be named the Cotchett Law Center and is the first building to be completed as part of the school's new Academic Village project, which aims to expand and update the school by creating new buildings or renovating already-existing ones.

According to UC Hastings dean David Faigman, naming the project's cornerstone building after the veteran lawyer, who has more than 100 jury trials under his belt, is fitting.

"Joe Cotchett is a true lion of the law, a fierce and effective advocate for those he represents, including many without means to afford the strongest voice, whom he has represented pro bono," Faigman said in a statement. "We will work to ensure that our students understand and emulate the commitment to fairness and justice that Joe has brought to the practice of law over a long and storied career."

Cotchett graduated from the school in 1964 and is a founding partner at the law firm Cotchett, Pitre and McCarthy LLP, which has offices in Burlingame, Los Angeles and New York.

In addition to serving on the UC Hastings Board of Directors, Cotchett has also served on the California Judicial Council and has been inducted by the State Bar of California into the Litigation Trial Lawyers Hall of Fame.

"I am honored to be an alumnus of UC Hastings Law, one of so many lawyers who, over the decades, have sought and achieved justice for people in need of a voice, along with the many alumni who have served in our judiciary," Cotchett said.

He added that the village project "comes at a time when maintaining and strengthening the rule of law in our nation is more important than ever."

The six-story, 57,000-square-foot building includes high-tech classrooms, a conference center, and shared indoor and outdoor community spaces. Other features include a rooftop Sky Deck with sweeping city views as well as a skybridge, located above a landscaped outdoor quad, that links the building to the school's Mary Kay Kane Hall building on McAllister Street.

Other buildings that have yet to break ground as part of the Academic Village project include a 14-story mixed-use complex to replace the school's already-existing Snodgrass Hall at 198 McAllister St.; the renovation of the school's iconic 28-story tower at 100 McAllister; and the redevelopment of the properties at 201-247 Golden Gate Ave.

The $55 million Cotchett Law Center is ready to be occupied, but with classes being held online because of COVID-19, the building will sit empty until city and state regulations allow for the school to reopen.

Faigman is set to formally announce the naming during a virtual Alumni Town Hall on Thursday.

UC Hastings joined neighborhood groups earlier this year in filing a lawsuit against the city of San Francisco over the conditions of the Tenderloin area where the school is located amid the pandemic. Reduced capacity in local homeless shelters led to an increased number of people living in tents in the area.

The city agreed to remove up to 300 tents, with their occupants offered free COVID-19 testing and relocation to a hotel room or other safe sleeping site.