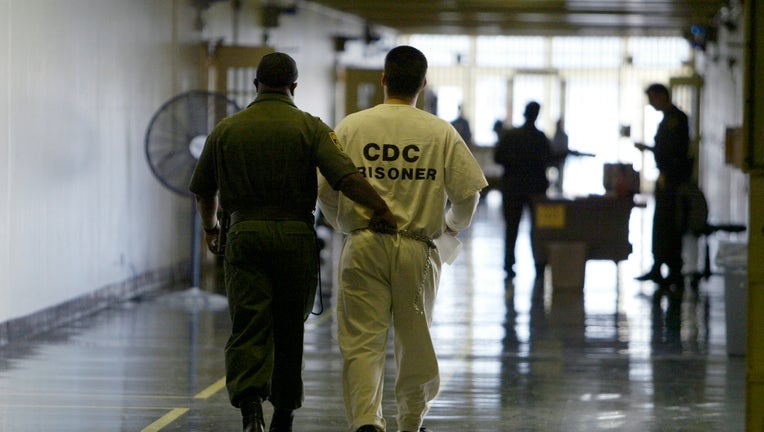 A prison guard escorts a prisoner down a hallway at the California Medical Facility on 10/27/05 in Vacaville, Calif. (Photo By Paul Chinn/The San Francisco Chronicle via Getty Images)

SAN FRANCISCO - A prominent California medical school has apologized for conducting dozens of unethical medical experiments on at least 2,600 incarcerated men in the 1960s and 1970s, including putting pesticides and herbicides on the men’s skin and injecting it into their veins.

Two dermatologists at the University of California, San Francisco — one of whom remains at the university — conducted the experiments on men at the California Medical Facility, a prison hospital in Vacaville that’s about 50 miles northeast of San Francisco. The practice was halted in 1977.

The university’s Program for Historical Reconciliation issued a report about the experiments earlier this month, writing that the doctors engaged in "questionable informed consent practices" and performed procedures on men who did not have any of the diseases or conditions that the research aimed to treat. The San Francisco Chronicle first reported the program’s findings Wednesday.

"UCSF apologizes for its explicit role in the harm caused to the subjects, their families and our community by facilitating this research, and acknowledges the institution’s implicit role in perpetuating unethical treatment of vulnerable and underserved populations — regardless of the legal or perceptual standards of the time," Executive Vice Chancellor and Provost Dan Lowenstein said in a statement.

The report said further analysis is needed to determine the extent of harms caused to the prisoners as a result of the experiments and what the university should do in response.

"We are still in the process of considering the recommendations and determining appropriate next steps," the university said in a statement Thursday. "As we do so, it will be with humility and an ongoing commitment to a more just, equitable and ethical future."

A spokesperson for the California Department of Corrections and Rehabilitation, Dana Simas, said officials had not yet read the report. However, the agency and California Correctional Health Care Services "strive to ensure the incarcerated population receive appropriate health care that meets the community standard of care and ethics," Simas wrote.

The report focused on research by Dr. Howard Maibach and Dr. William Epstein. Maibach continues to work at the university, and Epstein died in 2006. It was not immediately clear whether Maibach would face any discipline in light of the report.

The experiments involved administering doses of pesticides and herbicides to the incarcerated men, who volunteered for the studies and were paid $30 a month for their participation — among the highest-paid roles at the prison and in high demand, according to a 1977 article of the university’s student newspaper, The Synapse.

Other experiments included placing small cages with mosquitos close to the participants’ arms or directly on their skin to determine "host attractiveness of humans to mosquitos," the report stated.

The research ended in 1977 when California prohibited human subject research in state prisons, a year after the federal government halted the practice.

But Epstein in 1977 testified in state hearings in support of biomedical experimentation at prisons, the report found, and investigators could not find any evidence that he changed his opinion before he died.

While Maibach wrote that he regrets having participated in research that does not meet current standards in a letter to the university’s dermatology department, he said he believed the experiments had offered benefits to some of the patients.

"What I believed to be ethical as a matter of course forty or fifty years ago is not considered ethical today," he wrote. "I do not recall in any way in which the studies caused medical harm to the participants."

The university says there is no evidence that the doctors’ research was directed specifically at Black men, although they were trained by a now-deceased Philadelphia doctor whose research at a Pennsylvania prison was unethical and disrespectful toward the subjects, many of whom were incarcerated Black men.

The report also found that many of Maibach’s publications during his career perpetuate the biologization of race — which he addressed in his letter by saying he has now "come to the understanding that race has always been a social and not a biological construct, something not appreciated by so many of us in a prior era."

"While one of his (Maibach’s) recent articles hints at a possible reconsideration of the biology of race, we believe the long history of his research of skin differences along racial lines, with race as a possible biological factor, perpetuated the continuance of racial science in dermatology and has yet to be publicly addressed," the report stated.

Maibach’s son, Edward Maibach, wrote in an email Thursday to The Associated Press that his father had suffered a stroke last week and was unable to respond to press inquiries.

The younger Maibach said his father had not been allowed to meet with the report’s authors or access their documents. The report and a press release from the university, he wrote, treated his father "as a ‘lone ranger’ who seemingly acted without knowledge or approval at others at UCSF. This, too, is incorrect."

"Dr. Maibach’s activities at Vacaville were known to, and endorsed by, UCSF administrators, including the UCSF ethicist," Edward Maibach wrote.