India and South Africa have appealed to the World Trade Organization to temporarily relax intellectual property rules so coronavirus vaccines can be manufactured by nations that are struggling to inoculate their populations. The WTO is currently in talks over easing global trade rules to enable more countries to produce more of the life-saving vaccines.

The Biden administration has also faced increasing pressure from lawmakers on the left urging the president to support a temporary waiver.

"This is a global health crisis, and the extraordinary circumstances of the COVID-19 pandemic call for extraordinary measures," she said. "The administration believes strongly in intellectual property protections, but in service of ending this pandemic, supports the waiver of those protections for COVID-19 vaccines." 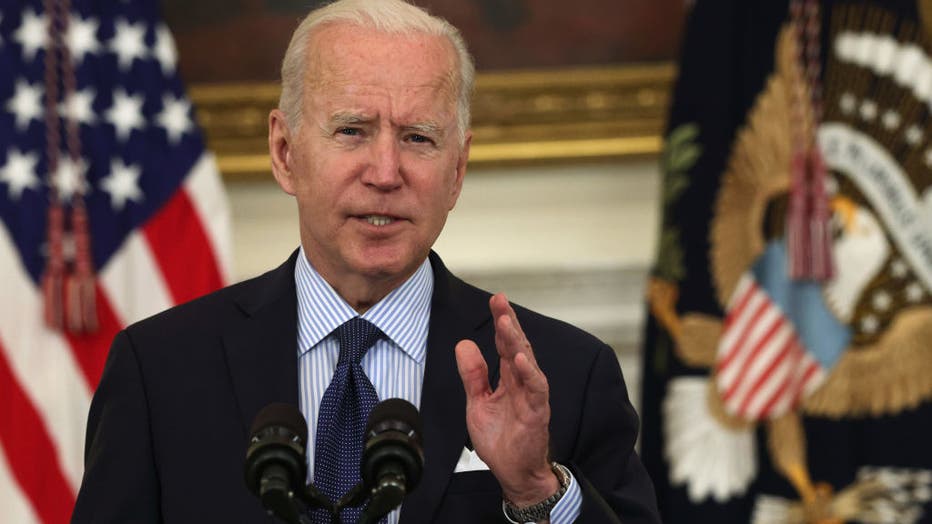 President Joe Biden delivers remarks on the COVID-19 response and the vaccination program during an event at the State Dining Room of the White House May 4, 2021 in Washington, D.C. (Photo by Alex Wong/Getty Images)

She said the country will participate in World Trade Organization negotiations, but cautioned that it will take time given the "consensus-based nature of the institution and the complexity of the issues involved."

"The administration's aim is to get as many safe and effective vaccines to as many people as fast as possible," the statement continued. "As our vaccine supply for the American people is secured, the administration will continue to ramp up its efforts — including working with the private sector and all possible partners — to expand vaccine manufacturing and distribution. It will also work to increase the raw materials needed to produce those vaccines."

Last month, 10 Democratic senators wrote a letter to Biden saying he should "prioritize people over pharmaceutical company profits" and support the temporary waiver of the rules.

A waiver could pave the way for generic or other manufacturers to make more vaccines.

The letter was penned by independent Sen. Bernie Sanders of Vermont, along with Democratic Sens. Elizabeth Warren of Massachusetts, Tammy Baldwin of Wisconsin and Sherrod Brown of Ohio. Democratic Sens. Richard Blumenthal of Connecticut, Chris Murphy of Connecticut, Edward Markey of Massachusetts, Jeff Merkley of Oregon, Chris Van Hollen of Maryland and Raphael Warnock of Georgia also signed the letter.

"Simply put, we must make vaccines, testing, and treatments accessible everywhere if we are going to crush the virus anywhere," the lawmakers say in the letter, which was obtained by The Associated Press.

House Speaker Nancy Pelosi, D-Calif., called Wednesday’s announcement "a welcome and important step" in the fight to end the pandemic.

"The president is to be commended for the United States’ plans to take a strong role in negotiations that are focused on how best to ensure that all countries have access to lifesaving treatments and vaccines during this extraordinary pandemic," Pelosi said in a statement. "We must also continue to provide the resources and assistance needed to turbocharge the production and deployment of vaccines, in order to vaccinate as many people as quickly as possible as the virus rages in many parts of the world.

The lawmakers' appeal to Biden came after a group of 170 former world leaders and Nobel laureates also sent a similar letter to Biden urging him to support a temporary waiver of the WTO’s intellectual property rules.

More than 100 nations support a temporary waiver, which could help vaccine manufacturing ramp up in poorer countries that are struggling to acquire vaccine supplies.

Opponents, including pharmaceutical companies, worry that it would set dangerous precedent in allowing scientists around the globe to copy American and European companies’ research — some of which was funded by the U.S. government — long before patents expire. The Trump administration had opposed calls for the waiver.

The coronavirus pandemic has killed more than 3.2 million people worldwide, including more than 578,000 in the U.S., 411,000 in Brazil and 226, 000 in India, according to figures compiled by Johns Hopkins University.