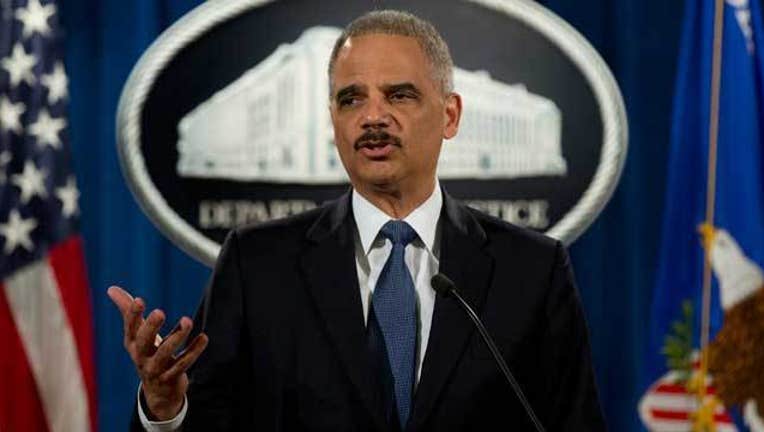 The dual reports marked the culmination of months-long federal investigations into a shooting that sparked weeks of protests and a national dialogue on race and law enforcement as the tenure of Attorney General Eric Holder, the first black person to hold that office, draws to a close.

In pairing the announcements, the Obama administration sought to offset community disappointment over the conclusion that the shooting of Michael Brown was legally justified with a message of hope for Ferguson's majority-black citizens. Officials announced 26 recommendations, including training officers in how to de-escalate confrontations and banning the use of ticketing and arrest quotas.

Holder called the federal report a "searing" portrait of a police department that he said functions as a collection agency for the city, with officers prioritizing revenue from fines over public safety and trouncing the constitutional rights of minorities.

"It is not difficult to imagine how a single tragic incident set off the city of Ferguson like a powder keg," Holder said.

The decision not to prosecute Darren Wilson, the white officer who was cleared in November by a state grand jury and has since resigned, had been expected. To win a federal civil rights case, officials would have needed to prove that Wilson willfully deprived Brown of his rights by using unreasonable force.

But the report found no evidence to disprove Wilson's testimony that he feared for his safety during the Aug. 9 confrontation. Nor were there reliable witness accounts to establish that Brown had his hands up in surrender when he was shot, Justice Department lawyers said.

One of Wilson's attorneys, Neil Bruntrager, said his client was satisfied with the outcome. Brown family lawyer Benjamin Crump said the family was not surprised but very disappointed, and one of Brown's uncles, Charles Ewing, said he believed Wilson was "getting away with it."

"I really was hoping they would have come up with better findings because this whole thing just does not add up," Ewing said. "Everything just doesn't make sense."

While the federal government declined to prosecute Wilson, it found that the shooting occurred in an environment of systematic mistreatment of blacks, in which officials swapped racist emails and jokes without punishment and black residents were disproportionately stopped and searched, fined for petty offenses and subjected to excessive police force.

A 102-page report about the department found that its lack of racial diversity — only four of 54 commissioned officers are black — undermined community trust. It also found that the city relied heavily on fines for petty offenses, such as jaywalking, to raise revenue. Police interpreted "innocent movements as physical threats" and engaged in practices that overwhelmingly affected minorities and reinforced patterns of racial bias, it said.

The document was filled with examples of what it called a discriminatory criminal justice system. One black woman spent six days in jail because of a parking violation, it said. A lawful protest was broken up with a police warning of "everybody here's going to jail." And a black man sitting in a car with tinted windows was accused without cause of being a pedophile by an officer who pointed a gun at his head.

Between 2012 and 2014, black drivers were more than twice as likely as others to be searched during routine traffic stops, but 26 percent less likely to be carrying contraband.

The report also included seven racially tinged emails, including some from city officials who remain employed, that did not result in punishment. The writer of one 2008 email stated that President Barack Obama would not be in office for long because "what black man holds a steady job for four years."

The report's recommendations, if accepted by city officials, could lead to an overhaul of basic practices by police officers and court officials. Those include improving officer supervision, better recruiting, hiring and promotion and new mechanisms for responding to misconduct complaints.

Missouri Attorney General Chris Koster, a Democrat, said the Justice Department report "reflects a theme I've heard repeated over the past months in countless conversations and meetings: the need for greater understanding and respect between law enforcement officers and the communities they serve."

Federal officials on Wednesday described Ferguson city leaders as cooperative and open to change, and said there were already signs of improvement. The city, for example, no longer issues failure-to-appear warrants, has eliminated a fee for towing cars and rescinded warrants for nearly 600 defendants.

Under Holder, the Justice Department has investigated roughly 20 police departments over alleged civil rights violations. Some have led to the appointment of independent monitors and have been resolved with negotiated agreements in which the police department commits to major changes in its practices.

"It's quite evident that change is coming down the pike. This is encouraging," said John Gaskin III, a St. Louis community activist. "It's so unfortunate that Michael Brown had to be killed. But in spite of that, I feel justice is coming."