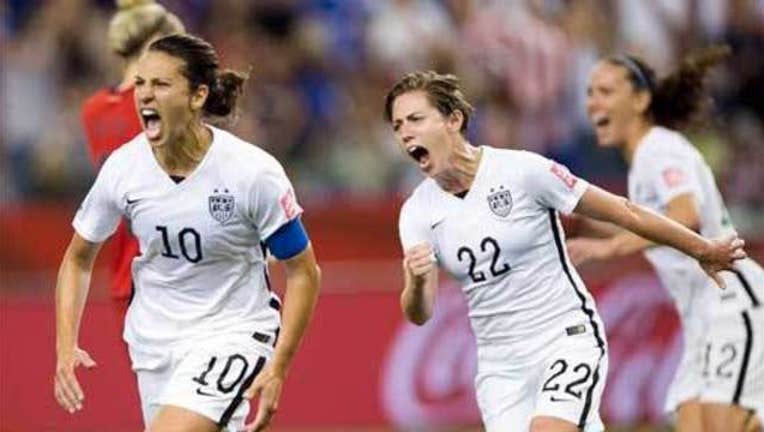 MONTREAL (AP) — Julie Johnston thought she had blown it.

Handed a yellow card for a foul in the box on Alexandra Popp, Johnston's heart sank when German striker Celia Sasic stepped up to take the penalty kick.

The United States went on to beat Germany 2-0 on a penalty kick from Carli Lloyd and a late goal from Kelley O'Hara, erasing Johnston's fear that she had cost her team the game and sending the Americans to the title match of the Women's World Cup.

"The team definitely lifted me up after that happened and finished the chances. Definitely an emotional roller coaster," Johnston said. "But it's a team sport and the team today really stepped up for me. I really can't thank them enough and I'm sure I'll thank them all the way to the final."

The United States is seeking its third World Cup title, but first since 1999. The Americans went to the final in Germany four years ago but fell in the end on penalty kicks to Japan.

Now the Americans wait to learn their opponent for the final: Defending champion Japan, ranked fourth in the world, faces sixth-ranked England in the other semifinal on Wednesday night.

The title match is set for Sunday at BC Place in Vancouver. Germany will play the loser of the second semifinal in the third-place game in Edmonton on Saturday.

"In a way maybe it's good for us," German coach Silvia Neid said through a translator about the consolation game. "We can have another match and maybe we can win one more."

Tuesday night's match was billed as the biggest of the tournament so far, a clash between the two highest-ranked teams in the world. More than 51,000 mostly pro-American fans filled cavernous Olympic Stadium.

Germany was coming off a hard-fought quarterfinal victory over No. 3 France, prevailing on penalty kicks after a 1-1 draw.

The United States, which had struggled to find its offense earlier in the tournament, had found success in a 1-0 quarterfinal victory over China by moving Lloyd to the top and allowing her to play more freely.

The tactic worked again against Germany; the United States kept its opponent on its heels for much of the match.

"We didn't come here just to make the final. We came here to win it,'" Lloyd said. "So we've got to go after it next game."

The key sequence came over a span of less than 10 minutes in the second half. Sasic's penalty kick came after Johnston fouled Popp in the box, which might have merited a red card. But the referee gave Johnston a yellow.

"The rule says yes," Neid said afterward, "but she didn't get a red card."

Sasic, who went into the match as the tournament's leading scorer with six total goals, fooled Solo but her kick went wide left, prompting a deafening roar from the crowd.

Shortly thereafter, Annike Krahn got a yellow card for fouling Alex Morgan in the box, but replays showed it occurred just outside. Lloyd's penalty kick was her third goal in three matches.

There was a scary moment in the first half when Popp and American midfielder Morgan Brian collided in front of the U.S. goal following a free kick from about 25 yards out.

Television cameras caught blood in Popp's hair, and Brian was prone on the field for several minutes. Both players returned to the match.

The United States improved to 3-1 against Germany in World Cup matches and 19-4-7 overall.

"I think inside our environment, we knew we had this in us," coach Jill Ellis said. "We do a good job of blocking out the distractions."

The tournament has played out with FIFA embroiled in scandal.

Blatter's second-in-command, secretary general Jerome Valcke, also will be absent from the biggest event in women's soccer "due to their current commitments in Zurich," FIFA said in a statement Tuesday.