WASHINGTON - The Biden administration says it's ready to join talks with Iran and world powers to discuss a return to the 2015 nuclear deal.

Such an invitation has not yet been issued but one is expected shortly, following discussions earlier Thursday between Secretary of State Antony Blinken and his British, French and German counterparts. 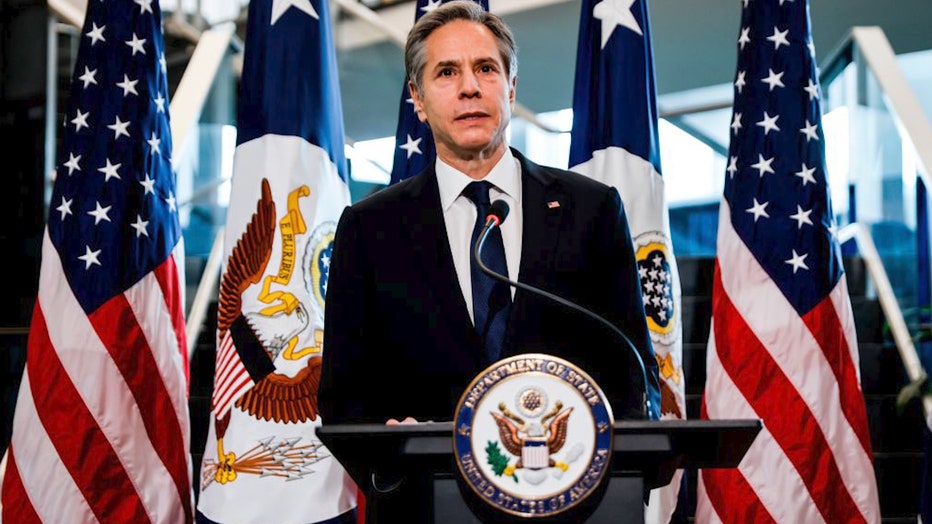 FILE - US Secretary of State Antony Blinken speaks during a welcome ceremony at the State Department in Washington, DC on Jan. 27, 2021. (CARLOS BARRIA/POOL/AFP via Getty Images)

RELATED: Some countries could require ‘vaccine passports’ by summer 2021

"The United States would accept an invitation from the European Union High Representative to attend a meeting of the P5+1 and Iran to discuss a diplomatic way forward on Iran’s nuclear program," State Department spokesman Ned Price said in a statement.

Earlier Thursday, Blinken and the foreign ministers of Britain, Germany and France urged Iran to allow continued United Nations nuclear inspections and stop nuclear activities that have no credible civilian use. They warned that Iran’s actions could threaten delicate efforts to bring the U.S. back into the 2015 deal and end sanctions damaging Iran’s economy.

Iran is "playing with fire," said German Foreign Minister Heiko Maas, who took part in the talks Thursday in Paris with his British and French counterparts. Blinken had joined via videoconference.

Iran has said it will stop part of International Atomic Energy Agency inspections of its nuclear facilities next week if the West doesn’t implement its own commitments under the 2015 deal. The accord has been unraveling since Trump pulled the U.S. out of the agreement.

Blinken reiterated that "if Iran comes back into strict compliance with its commitments ... the United States will do the same," according to a joint statement after Thursday’s meeting that reflected closer trans-Atlantic positions on Iran since President Joe Biden took office.

The diplomats noted "the dangerous nature of a decision to limit IAEA access, and urge Iran to consider the consequences of such grave action, particularly at this time of renewed diplomatic opportunity."

They said Iran’s decision to produce uranium enriched up to 20% and uranium metal has "no credible" civilian use.

The 2015 accord is aimed at preventing Iran from developing nuclear weapons. Tehran denies it is seeking such an arsenal.

"We are the ones who have kept this agreement alive in recent years, and now it’s about supporting the United States in taking the road back into the agreement," Maas told reporters in Paris.

"The measures that have been taken in Tehran and may be taken in the coming days are anything but helpful. They endanger the Americans’ path back into this agreement. The more pressure that is exerted, the more politically difficult it will be to find a solution," he said.

Iran’s threats are "very worrying," British Foreign Secretary Dominic Raab said, stressing the need "to re-engage diplomatically in order to restrain Iran, but also bring it back into compliance."

The diplomats also expressed concern about human rights violations in Iran and its ballistic missile program.

In Iran, President Hassan Rouhani expressed hope Thursday that the Biden administration will rejoin the accord and lift the U.S. sanctions that Washington re-imposed under Trump, according to state television.

Tehran has been using its violations of the nuclear deal to put pressure on the remaining signatories — France, Germany, Britain, Russia and China — to provide more incentives to Iran to offset the crippling sanctions.

German Chancellor Angela Merkel and the president of the European Council spoke with Rouhani this week to try to end the diplomatic standoff. The head of the IAEA is scheduled to travel to Iran this weekend to find a solution that allows the agency to continue inspections.

Geir Moulson in Berlin and Angela Charlton and Masha Macpherson in Paris contributed.