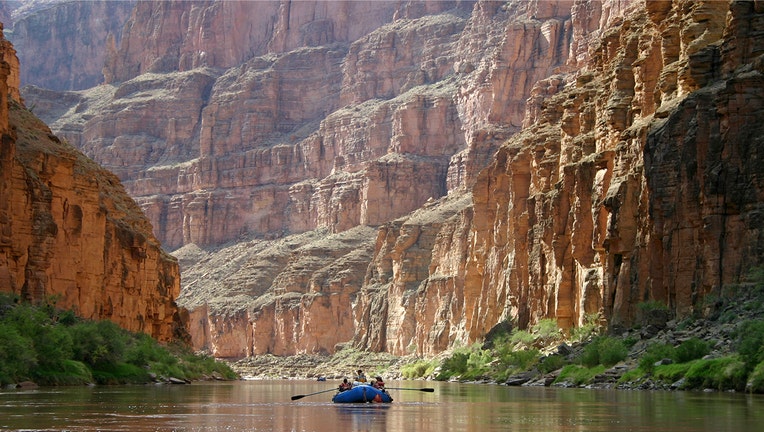 CARSON CITY, Nev. - The white rings that wrap around two massive lakes in the U.S. West are a stark reminder of how water levels are dropping and a warning that the 40 million people who rely on the Colorado River face a much drier future.

Amid prolonged drought and climate change in a region that's only getting thirstier, when that reckoning will arrive — and how much time remains to prepare for it — is still a guess.

The U.S. Bureau of Reclamation is expected to release projections Friday that suggest Lake Powell and Lake Mead will dip slightly in 2021. That determines how much water flows to cities and farms in seven states. Despite the dip, Lake Mead's levels are expected to stay above the threshold that triggers mandatory water cuts to Arizona and Nevada, giving officials throughout the Southwest more time to prepare for a future when the flow will slow.

The Colorado River supplies Arizona, California, Nevada, Colorado, New Mexico, Utah, Wyoming and Mexico. Its water pours out of faucets in growing cities like Denver, Las Vegas and Phoenix and nourishes enough farmland to yield 15% of total U.S. crop output and 13% of its livestock production.

Last year, with increasingly less water flowing to Lake Mead and Lake Powell — the two largest man-made reservoirs in the United States — Arizona, California and Nevada agreed to a drought contingency plan that built in voluntary cuts to prevent the reservoirs from dropping so low that they cannot deliver water to cities and farms. The other states historically haven’t used their full allocation of water and focus on ensuring the level in Lake Powell is high enough to generate hydropower.

For the first time, Nevada and Arizona didn't receive their full share of water last year after the Bureau of Reclamation projected Lake Mead would dip to 1,089 feet. The impact was minimal, however, and didn't trickle down to water users. Mexico also agreed to cuts.

When projections drop below 1,075 feet, Nevada and Arizona will face deeper cuts mandated by agreements between the seven states and Mexico. Next year, the states will begin renegotiating the deals expiring in 2026.

“The future of the river is going to be drier than the past. All the climate models and the current drought suggest that,” said Colby Pellegrino, Southern Nevada Water Authority's deputy general manager of resources. “Every sector is going to have to learn how to do more with less.”

Since 1990, the population has more than tripled in the Las Vegas area, which gets nearly 90% of its water from the Colorado River. But by treating and recycling almost all water used indoors — for flushing toilets and running dishwashers, for example — and replacing nearly 305,000 square miles of grass with desert-friendly landscaping, the area has been able to consume far less water than it’s allocated.

Elsewhere, officials are scrambling to find alternative water sources to sustain growing cities and farms. Agricultural areas can't replicate Las Vegas' turf removal program. And Nevada's ability to treat and then store recycled wastewater in Lake Mead, which is about 30 miles (48 kilometers) east of Las Vegas, can't be done in other places with less storage capacity, like Southern California, where wastewater runs into the Pacific Ocean.

For now, Cooke said, people can take comfort in the progress to secure the river's future with last year’s drought contingency plan. But once Lake Mead dips low enough, Arizona will endure the most painful cuts of any state based on an agreed-upon priority list — first rural farmers, then eventually cities.

“It’s at least a couple of decades until we’re saying, ‘We don’t have one more drop for the next person that comes here,’” he said. “But people certainly ought to be aware that water — the importation of a scarce commodity into a desert environment — is expensive and, with climate change, going to get even more expensive.”

Arizona pays tribes that leave behind about 785,000 acre-feet of Colorado River water they're entitled to each year, or enough to fill about 3.2 billion average-sized bathtubs. The state relied heavily on unused water from the Gila River Indian Community and the Colorado River Indian Tribes to fulfill its obligations in the drought contingency plan. At some point, that arrangement could change as supplies shrink and tribes need to use more of their share.

“What you’re seeing is these expensive projects are dying because of this conservation trend,” he said. “They’re just super expensive, and we’re seeing communities successfully conserving without too much trouble. Without them, it doesn’t feel particularly painful.”

Cooke of the Central Arizona Project acknowledged the costs of finding new water sources but said conservation-minded academics like Fleck have a different perspective because they aren’t accountable to customers and constituents.

“We’re working on both of those things — both to reduce consumption and to increase supply — and we don’t have to make a choice between one or the other,” Cooke said.