As the Biden administration’s COVID-19 vaccine mandate for federal workers takes effect Monday, a U.S. official said more than 90% of federal employees have received at least one shot.

About 4 million federal workers are to be vaccinated by the end of the day Nov. 22 under the president’s executive order. Biden announced in September they were required to undergo vaccination, with no option to get regularly tested instead, unless they secured an approved medical or religious exemption.

In all, more than 95% of federal workers are in compliance with the Biden mandate, the official said, either by being vaccinated or having requested an exemption. Workers who are not in compliance are set to begin a "counseling" process that could ultimately result in their termination if they don't get a shot or secure an approved exception to vaccination.

The official spoke on the condition of anonymity to discuss the statistics because the official wasn't authorized to speak on the record before their official release later Monday.

White House press secretary Jen Psaki said Friday that the White House will be watching the numbers closely of those getting last-minute shots throughout the day.

"What we have seen is there is a surge in attestations and vaccination as we get closer to the deadline, which is certainly encouraging. But we want to have the final data Monday, through the day, before we release that publicly," she said.

"We are the largest employer in the country. So it is — the U.S. government that is, of course — so it’s going to take some time to collect the data, even as it comes in that day," she continued.

Although the FDA and CDC opened up booster shots to all Americans on Friday, Psaki said the mandate is abiding by the CDC guidelines of what’s considered fully vaccinated — two shots of an mRNA vaccine or one J&J shot.

"We’re not going to get ahead of any changes they could make in the future," she said.

About 70% of U.S. adults are fully vaccinated. Yet that rate of vaccination hasn’t been nearly enough to stop the spread of the virus, especially the highly contagious and now dominant delta variant.

The U.S. is now averaging more than 92,000 new coronavirus cases per day, up from 72,000 two weeks ago, and hospitalizations are starting to increase again after steadily falling since the peak of the summer delta variant surge. The country is still averaging more than 1,100 deaths a day, and the number of Americans to die from COVID-19 now stands at 768,000.

President Joe Biden noted that businesses that have already imposed vaccine mandates on their employees, along with requirements for the military and federal contractors, have cut the number of unvaccinated Americans over age 12 from 100 million in late July to about 60 million.

Some federal employees, like those at the White House, are nearly all vaccinated ahead of Monday’s deadline. But the rates are lower at other federal agencies, particularly those related to law enforcement and intelligence, according to the agencies and union leaders. And some resistant workers are digging in, filing lawsuits and protesting what they say is unfair overreach by the White House.

Psaki said the administration didn’t expect any operational disruptions due to the mandate.

"In fact, the requirement will avoid disruptions, in our view, in our labor force because vaccinations help avoid COVID," she said. 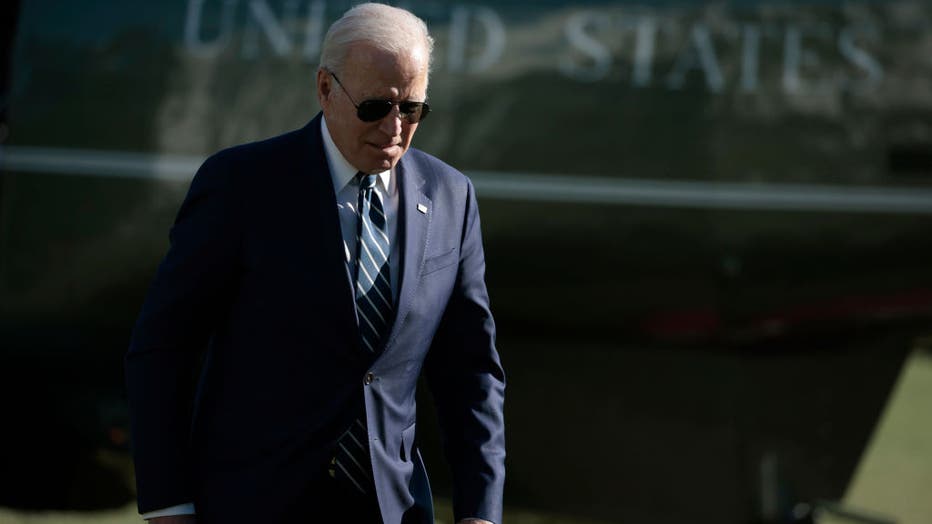 U.S. President Joe Biden walks off Marine One after returning to the White House from Walter Reed Medical Center on November 19, 2021 in Washington, DC. Biden went to Walter Reed for a colonoscopy and medical check up. (Photo by Anna Moneymaker/Getty

Monday’s deadline is the first test of Biden's push to compel people to get vaccinated. Beyond the federal worker rule, another mandate will take effect in January aimed at around 84 million private sector workers.

Earlier this month, a temporary hold on that mandate was upheld by a federal appeals court. The administration says it is confident that the requirement will withstand legal challenges in part because its safety rules preempt state laws.

Meanwhile, last week the U.S. Occupational Safety and Health Administration suspended all activities related to the implementation and enforcement of the mandate for big companies while it’s tied up in court.

If the mandates are a success, they could make the most serious dent in new coronavirus cases since the vaccine first became available.

OSHA previously estimated that the new requirements for federal workers and those in the private sector would save 6,500 lives and prevent 250,000 hospitalizations in the six months after the rules take effect.

Vaccines have a proven track record of safety, backed by clinical trials and independent reviews showing them overwhelmingly effective at preventing serious illness and death from COVID-19. More than 230 million Americans have received at least one vaccine dose and more than 196 million are fully vaccinated. More than half of the world's population has also received a shot.