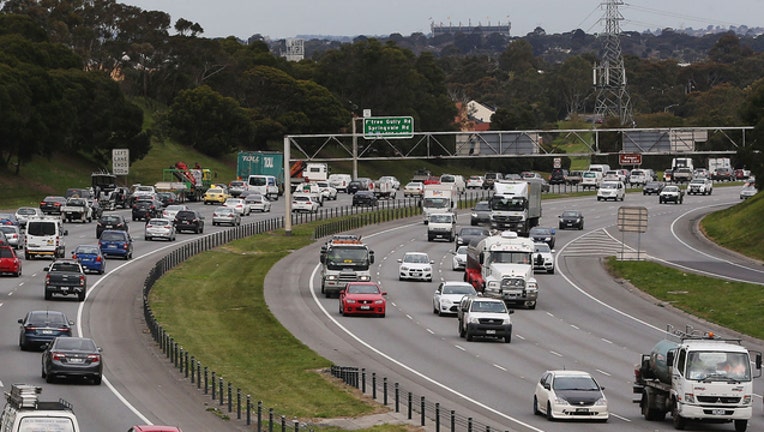 Heavy city traffic leaves on the Monash Freeway in Oakleigh after a strike by Rail, Tram and Bus Union workers on September 4, 2015 in Melbourne, Australia. (Photo by Michael Dodge/Getty Images)

MELBOURNE, Australia (FOX NEWS) - An Australian woman narrowly avoided death when a freeway sign tumbled onto her SUV Tuesday -- a freak incident captured on video by another driver.

The woman was driving on the Tullamarine freeway in Melbourne when the large metal sign came crashing down without warning, Sky News Australia reported.

In video obtained by 9News, the sign is seen slamming into the SUV, but, remarkably, it barely injured the driver.

“She was driving a big SUV, I was driving a smaller car, it would’ve crushed my car,” Ali Murad, who was driving behind the lucky woman and captured the incident on dashcam video, told 9News.

Murad's video also shows the aftermath of the accident, with the SUV's roof caved in and glass and debris strewn along the freeway.

The woman, identified by the television station as Nella Lettieri, sustained minor neck injuries and was taken to a hospital where she was listed in stable condition.