SAN FRANCISCO - A video of an irate woman taking down yellow tape at a San Francisco playground has gone viral. She’s seen angrily ranting about the play area’s closure and hurled racist comments to a public outreach coordinator for the city’s rec and park department.

It happened on Sunday at the Helen Diller Playground in Dolores Park, where outreach coordinator Andrés Patino was working and ended up videotaping the disturbing encounter.

“This is an unconstitutional, unlawful taking of public property,” she said as she inched closer to Patino with scissors in hand.

Her movement prompted Patino to say, “Please do not push me with the scissors.”

In response, she said, “I’m not chasing you, you dumb sheep.”

She walked back toward the play area, and then pivoted to facing him to yell out more words. “Go to the hospital tell ‘em to put you on a ventilator. They’ll kill you with a ventilator like they’re doing thousands of others.”

She continued to express anger about the park’s closure, proclaiming that it belonged to taxpayers. And then her rant escalated. “We paid for it,” she cried, using a racist slur, and then she raged, “Go back to wherever the hell you came from.”

The attack appeared to end with the arrival of a uniformed park ranger who was called to the scene. 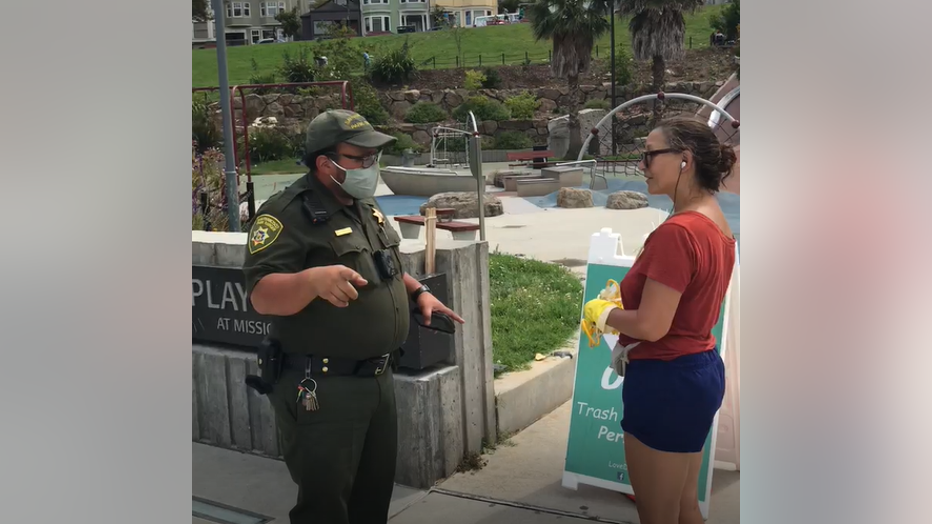 “Our rangers responded to the verbal assault on Andrés and the vandalism of park property," rec and parks spokeswoman Tamara Aparton told KTVU in a statement. “The woman was escorted from the park and the investigation is continuing.”

Park officials said the video was very painful to watch and denounced the behavior. “Hate simply has no home in Dolores Park or San Francisco,” Aparton said.

Aparton noted that it was thanks to rec and park workers like Patino that the city has been able to keep Dolores Park and other public spaces open during the pandemic.

As outreach coordinator at Dolores Park, Patino’s job has been to ensure that visitors to the grounds felt safe and welcome, which included reminding park goers to wear masks and keep safely distanced from one other.

Patino had a few words for the woman. On Facebook, where he shared the video he wrote, “Nothing gives you the right to treat people poorly and endanger the public safety of others by going against city health guidelines.”

And he had another message for her: “Your bigotry is neither needed, wanted, or accepted here… I want to tell whoever this Karen may be that this City I love and call home, is a place that supports, welcomes, and looks out for one another," adding, "Your type of racist behavior is not ok and goes against the core ideal of what it means to be a San Franciscan.”