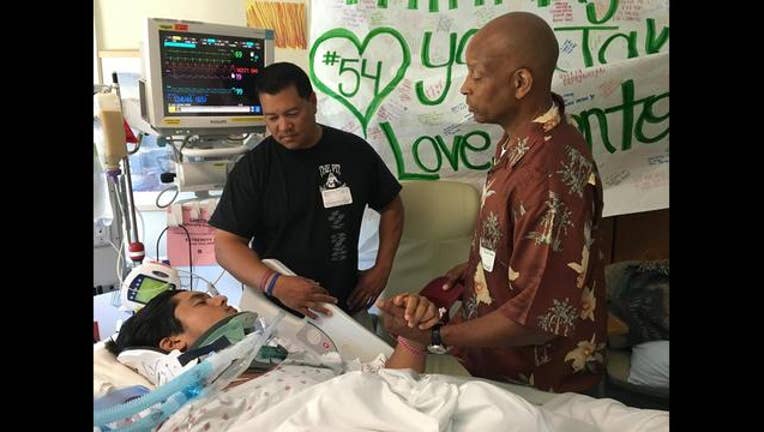 Jake Javier is visited by NFL Hall of Famer Ronnie Lott during a recent visit. (Courtesy).

DANVILLE (KTVU) -- Family and friends have been invited to attend a weekend prayer vigil for a recent San Ramon Valley High School graduate who is now paralyzed after breaking his neck a day before he was to receive his high school diploma.

The event for Jake Javier is scheduled to be held at the San Ramon Valley High School stadium field on Sunday, June 26 at 8 p.m.

Javier, the son of a Hayward police officer, suffered a broken neck on June 9, 2016 while diving into a swimming pool on Estates Drive, family members have said. He was rushed by helicopter to John Muir Medical Center in Walnut Creek for treatment.

According to a posting by his brother on Javier's community Facebook page, the student athlete is expected to leave the intensive care unit before starting physical therapy.

"Keep the good thoughts and prayers coming!" says a post attributed to his brother, Cameron. "His journey is just beginning."

School officials have said that Javier has had surgery to stabilize his spine but that he is paralyzed from the chest down. It was not expected that he would regain the use of his legs.

Immediately following the accident, the San Ramon Valley fire battalion chief said the accident occurred in a residential pool. The boy was conscious and talking to rescue workers when they arrived.

Javier had been named Athlete of the Year and was planning to play football next year at Cal Poly San Luis Obispo. Friends said the 6-foot-4-inch tall athlete was diving from a raised hot tub into the pool.

Family members say they have been touched by the support they have received from the community as Javier works to recover from the accident.