CHICAGO - A photo of a 102-year-old woman seen dropping off her ballot, fully decked out in protective gear has gone viral, as it’s served as a message for everyone to vote by any means necessary. 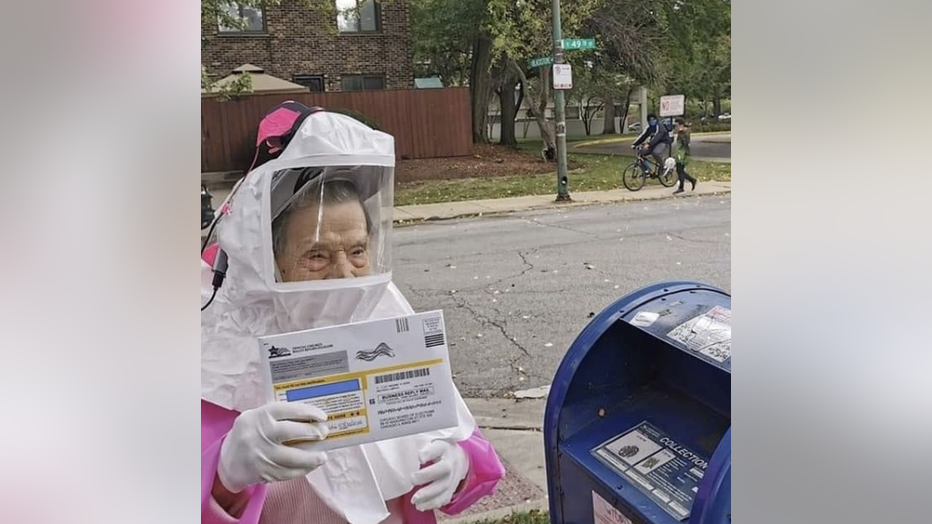 The photo was posted on social media by the Chicago Teachers Union (CTU), which challenged people with this: “This is 102-year-old CTU retiree Bea Lumpkin casting her vote-by-mail ballot. If Bea can do it, anyone can do it. Vote!”

The retired teacher, who was born before the 19th Amendment gave women the right to vote, has never missed participating in an election, and was not about to let a pandemic prevent her from casting her vote.

Dressed in a bright pink coat, she's seen smiling behind her protective hood, her gloved hands proudly holding up her ballot before she dropped it off in the mail on Thursday.

The photo was shared with the teachers union by Lumpkin’s grandson Soren Kyale, a rank and file member of CTU and a math and physics teacher at Spry Community Links High School in Chicago.

The image has inspired thousands of people who have called Lumpkin a hero, a role model, and a national treasure.

On Instagram @medveddenise commented, “Ruth Bader Ginsburg would be proud! Bea Lumpkin makes me proud -- and reminds us all what a blessing and a privilege the right to vote is! JUST DO IT! Voting is your VOICE!”

@bougierougefashion expressed her gratitude saying, “Thank you for being such an awesome role model for all citizens of the USA. When all the risks are weighed, we can not afford to not vote."

Others noted that this was not the first pandemic Lumpkin had lived through and that she's demonstrated that nothing will keep her from exercising her right to vote.

“She was born in 1918 when the previous major worldwide pandemic happened,” Instagram user @deltasceptile wrote, “She was destined to live this long and vote in 2020.”