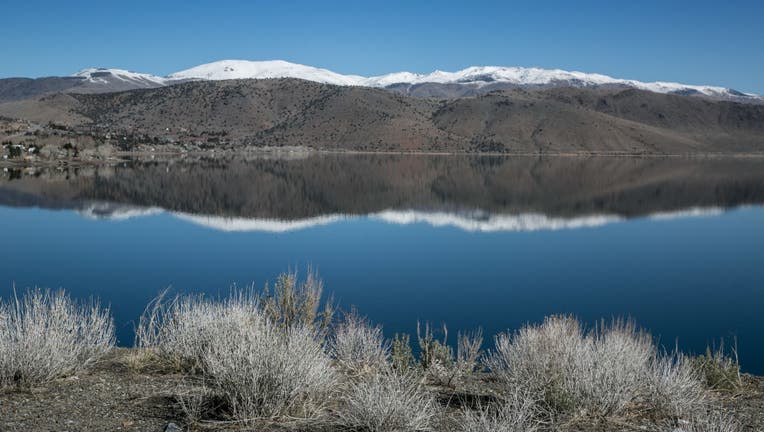 WALKER, CA - MARCH 18: Topaz Lake, located 75 miles south of Reno along Highway 395 on the Nevada/California border, is viewed on March 18, 2019, near Walker, California. The Eastern edge of the Sierra Mountain Range is extremely remote but becomes a

The Walker river cascades down from Yosemite National Park and is diverted along the way to quench private users, crops and cattle. Over time, those diversions have left the lake smaller, brinier and less appealing to tourists, who once helped sustain the otherwise remote, rural region.

For years, the only time the river ran to the lake was when there was so much snow in the Sierra Nevada mountains that farmers and ranchers couldn't use all the available water. In 2019, federal officials allocated water to replenish the lake for the first time — a victory for its defenders.

But its fate is still uncertain, they say. Plummeting lake levels have spurred a decades-long court battle over the scope of the “public trust doctrine” — a prevalent concept in water law throughout the U.S. West that requires states protect natural resources for future generations. Amid the ongoing dispute, the U.S. Ninth Circuit Court of Appeals asked the Nevada Supreme Court to clarify whether the public trust doctrine could be used to change pre-existing water rights.

On Sept. 17, the court upheld the legal principle's applicability to streams, lakes and groundwater. But it limited its scope by ruling that private water use — for crops or cattle, for example — benefitted the public and thus didn’t conflict with the public trust doctrine and couldn't be used to reallocate water rights.

“Nevada’s comprehensive water statutes are already consistent with the public trust doctrine because they (1) constrain water allocations based on the public interest and (2) satisfy all of the elements of the dispensation of public trust property,” Justice Lidia Stiglich wrote in the court’s majority opinion.

Simeon Herskovits, an attorney representing the Walker Lake Working Group, said that by focusing exclusively on reallocation, the court hadn't ruled on whether the public trust doctrine could be used to mandate water management methods like incentivizing conservation or habitat restoration.

“We’re unhappy with at least part of the majority of the opinion from the Nevada Supreme Court, but it doesn’t end our claim or address numerous other forms of relief,” he said. “Reallocation as a potential form of remedy is off the table, but they have not taken any other form of relief off the table.”

As the U.S. West contends with a hotter, drier future, the decision could reverberate to neighboring states facing similar battles. In California, courts have already ruled the public trust doctrine can be used to reallocate water for tidelands and lakes, but Herskovits expects that the Nevada decision will be watched by states balancing laws mandating preservation with already allocated water rights — and in Nevada, where a decision will govern struggles over water.

“Nevada is one of many states that have struggled to define ‘public trust.’ The decision may stand as an influential precedent in California, Arizona, Utah and elsewhere,” he said.

He said the federal appeals court will consider the state court’s opinion and determine its next steps in the upcoming months.

Sam Metz is a corps member for the Associated Press/Report for America Statehouse News Initiative. Report for America is a nonprofit national service program that places journalists in local newsrooms to report on undercovered issues.