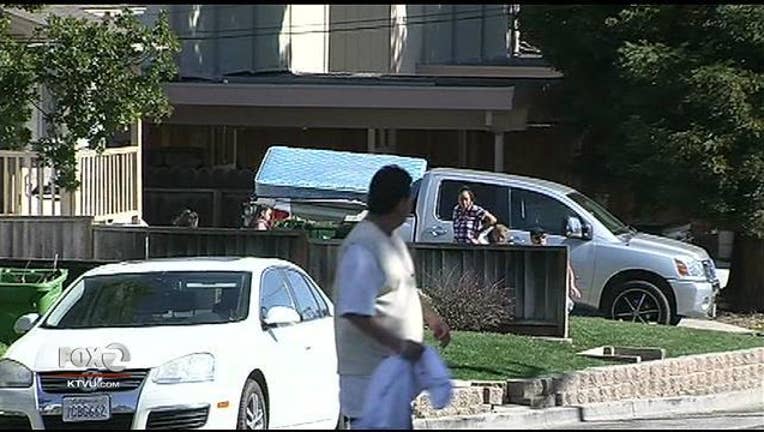 WALNUT CREEK, Calif (KTVU) – A gentrification battle is brewing in Walnut Creek after a handful of families have refused to leave the homes they've rented for several years.

The families have known for about four months that they must vacate the homes they rent on Lacassie Avenue and Ygnacio Valley Road by Feb. 22.

According to the residents, the landlords plan to sell the properties to a developer.

The homes sit on a desirable location next to the Walnut Creek BART station and it is the future site of a high end housing complex called "The Landing."

Some families have settled in other Bay Area cities, but a few are standing their ground like Lorena Rios.

"We don't have anywhere to go yet," she said.

The mother of three children said she doesn't want to move them to another school.

Her husband said they have looked for apartments, but they are too expensive.

The Rios family and several others are waiting to hear if they'll qualify to move into another Walnut Creek housing complex scheduled to open in April 2015.

They were told they would get on a priority list for the Third Avenue housing complex if they qualified, but several families said they are still waiting to hear an answer.

"I'm hoping to get a place," Maria Rios said.

The families are stressed about the possibility of being left out on the street.

Bay Area Legal Aid Staff Attorney David Levin, who represents the families, said he is optimistic he will be able to reach an agreement with the attorney for the landlords and grant a 6-week extension to the tenants. The extension could be agreed upon within the next several days.

"I just hope they give it to us because we have nowhere else to go," Rios said.

The battle between the tenants began in December 2014 when they filed a complaint with the U.S. Department of Housing and Urban Development in which they claimed the City of Walnut Creek discriminated against them for not providing information to the Latino families about the changes to the property in Spanish. According to the residents, H.U.D. is still investigating.