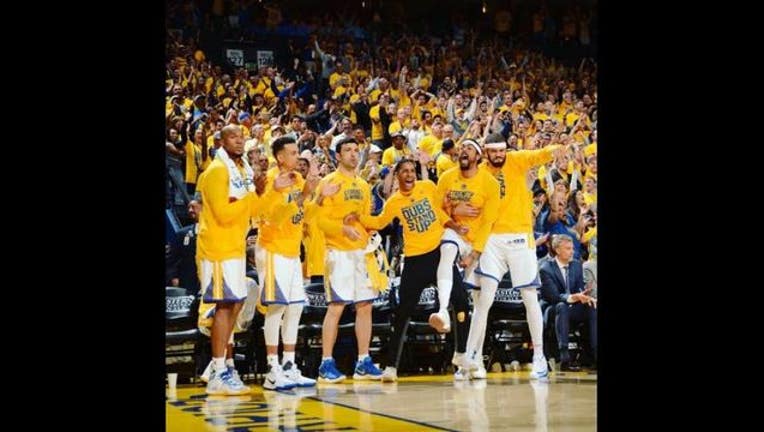 OAKLAND, Calif. (AP) - Stephen Curry started the rally in the third to get Golden State going, then Kevin Durant was determined to do his part in the fourth.

Two of the biggest stars on one side delivered when the best player on the other went down.

Curry scored 40 points and hit a tying 3-pointer with 1:48 remaining, and the Warriors rallied from way behind after Kawhi Leonard was lost to an ankle injury to beat the San Antonio Spurs 113-111 on Sunday in Game 1 of the Western Conference finals.

"It's the playoffs. You've got to expect everything," Curry said. "I wouldn't call it smooth sailing at all. We've actually had to execute and get to this point. They came out and challenged us heavy, put a nice little run together. It took us a minute to figure it out to get up to that game speed after this little break. It's definitely a nice way to win Game 1. We've got to capitalize off that and start Game 2 a lot better."

Draymond Green gave Golden State the lead for good on a three-point play after the Warriors trailed by as many as 25 points.

Leonard left in the third quarter after he re-injured his left ankle, and the Warriors capitalized with an 18-0 run.

Durant scored 10 straight points during a key fourth-quarter stretch on the way to 34 points, while Zaza Pachulia had 11 points and nine rebounds.

Game 2 in the series is Tuesday night back at Oracle Arena.

Curry scored 19 points in the third quarter and went 7 for 16 on 3s and 14 of 26 overall as the Warriors overcame their largest halftime deficit ever in the postseason at 20 points.

Leonard first went down after stepping on a teammate's foot along the bench after taking a shot. Pachulia later slid toward him as he came down from shooting and Leonard fell into the Spurs bench, grabbing his ankle.

Losing Leonard could be the story of this series, though coach Gregg Popovich had no update except that Leonard hurt the same foot. He shot 7 of 13 in 23 minutes to go with eight rebounds and three assists. He made all 11 of his free throws.

He sat out Game 6 of the last round against Houston, a 39-point, series-clinching win on Thursday, after injuring the ankle in a Game 5 overtime victory.

"It's a tough break. He's coming from an injury on that ankle and he tweaked it twice in the last minute he played," Manu Ginobili said. "So we couldn't react to his absence."

Durant has repeatedly spoken of elevating his game when it matters most - and wow did he do it at the very moment the Warriors needed a huge lift on their home floor.

His 3-pointer with 7:53 to play got Golden State within 94-88, then he drove to his left and right by Kyle Anderson for an emphatic one-handed slam the next possession to ignite a deafening sellout crowd. Durant hit another 3 at the 6:10 mark and a jumper the next time down before Shaun Livingston's driving dunk.

"Steph got us going in the third, I just tried to do my part in the fourth," Durant said.

Popovich lost to good friend and old pupil Mike Brown, filling in as Warriors acting coach for the ailing Steve Kerr - who played for Popovich.

Yet for much of the afternoon, the Spurs outplayed the mighty Warriors on both ends of the floor.

While Kerr spoke to the team at halftime, he watched the game from behind the scenes in the arena a day after returning to the practice floor for the first time in more than three weeks.

"He's gone through hell," Popovich said pregame. "I'm sure most people don't really know, and I'll leave that to him to describe as much as he wants to describe. But it's been very difficult for him. He's shown a lot of courage getting through what he's gone through."

Spurs: Patty Mills, a college star at nearby Saint Mary's, struggled in place of the injured Tony Parker - out for the remainder of the playoffs with a leg injury. Mills shot 1 for 8 and missed all six of his 3-point tries for five points. "I don't want to talk too much about Patty Mills because the more good things I say the more we're going to have to pay him," Popovich cracked before the game. ... Pau Gasol picked up two quick fouls and his third 5:18 before halftime.

Warriors: San Antonio forced 19 turnovers and had six steals among the Warriors' initial nine miscues. ... Green received his second technical of the postseason when he celebrated a third-quarter steal and referee Marc Davis penalized him. ... Golden State's 16 points in the first were its lowest-scoring quarter of the postseason. ... Andre Iguodala was limited by a sore left knee.