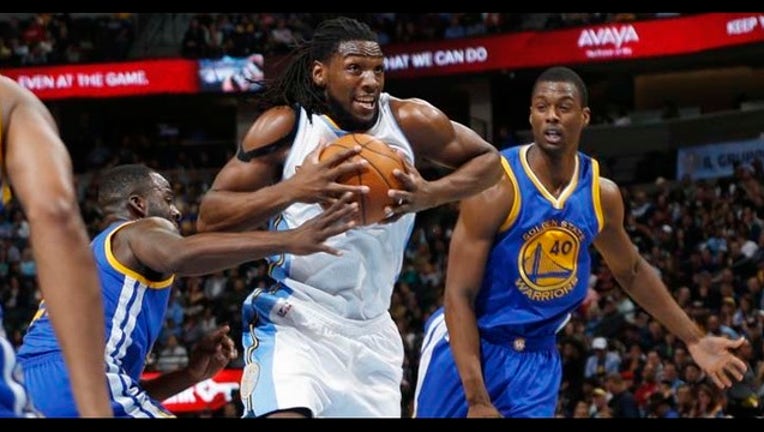 DENVER (AP) — Kenneth Faried had 24 points and 17 rebounds, Randy Foye hit three crucial 3-pointers down the stretch and the Denver Nuggets rallied to beat short-handed Golden State 114-103 on Friday night as the Warriors rested several of their top players, including Stephen Curry.

The Nuggets pulled off an impressive double this week — beating Atlanta, the Eastern Conference leader, on Wednesday and now the Warriors, who are on top in the Western Conference. Denver also improved to 5-2 since interim coach Melvin Hunt took over for Brian Shaw.

Gone with the five who sat was about 70 of the league-leading 109.6 points the Warriors are averaging this season.

The Nuggets led most of the way until Golden State's cast rallied back. The Warriors took their first lead of the game on a dunk by McAdoo with 29 seconds left in the third quarter and increased the lead to seven points with 7:21 remaining.

But Denver closed the game on a 25-7 run, with Foye leading the way from behind the 3-point line. He scored 11 of his 20 points in the fourth quarter as the Nuggets avenged a 122-79 at Golden State on Jan. 19, their worst loss of the season.

Not able to entertain the crowd with his sharp-shooting on the court, Curry did the next best thing during timeouts — he did some dancing. Curry also jumped up and cheered several times on big plays and even drew up a play on a marker board in the fourth quarter.

The Nuggets were without Darrell Arthur (calf) and Ty Lawson (illness), but had rookie center Jusuf Nurkic back on the floor after missing the last eight games with a sprained right ankle. He had four points in limited minutes.

Kerr understands the criticism of resting his top players. He said he would be upset, too, if he was a fan and Curry sat out.

"But I can't base my team's welfare on that," Kerr explained. "It's one of the reasons I do it on the road — we like to look after our own fans. I'd like to look after Denver's fans and everybody else's fans, but the reality is that for our team to prosper and be in the best shape going forward, Steph and Klay needed the night off."

Kerr said he consulted with both Curry and Thompson before making the decision and both were amenable.

"That's when I knew they needed it," said Kerr, who may rest Thompson and Curry once or twice more before the season ends.

Hunt has certainly endeared himself to this team since stepping in for Shaw. He's emphasized an up-tempo style, which has energized the squad. They've scored 100 or more in every game under Hunt.