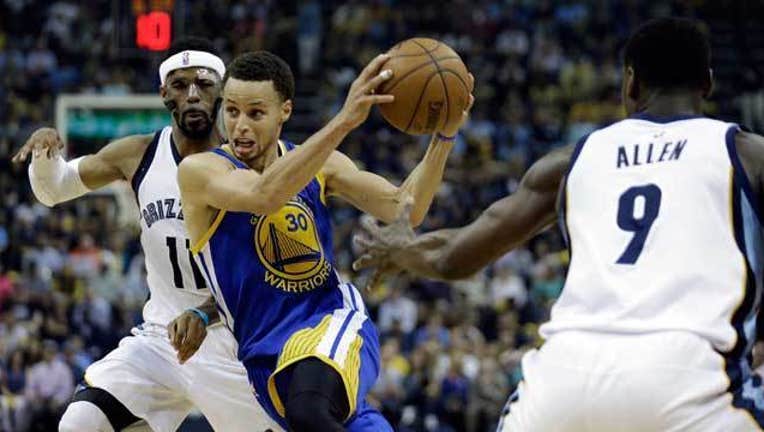 MEMPHIS, Tenn. (AP) — MVP Stephen Curry scored 21 of his 33 points by halftime, and the Golden State Warriors snapped their two-game skid Monday night by routing the Memphis Grizzlies 101-84 to tie their Western Conference semifinal at 2-2.

The Warriors hadn't lost three straight games all season, and they never came close as they took back home-court advantage. Curry hadn't scored more than 23 points in this series, and he nearly had that by halftime.

Draymond Green had 16 points and 10 rebounds for the Warriors while Klay Thompson had 15 points, Harrison Barnes 12 and Andre Iguodala 11.

Marc Gasol had 19 points and 10 rebounds for Memphis while Zach Randolph had 12 points and 11 rebounds. Mike Conley finished with 10 points and seven assists but was 4 of 15 from the field. Memphis pulled its starters with 3:00 left.

Memphis coach Dave Joerger gave his Grizzlies a history lesson reminding them how they had blown 2-1 leads in the postseason. It didn't help as the Grizzlies lost their fourth straight Game 4, the third of those on their own court. They just didn't play with the same defensive intensity as the last two games.

Instead, it was the Warriors beating the Grizzlies to nearly every loose ball, scrapping to keep their dream season as the NBA's best team from falling to the brink of elimination. They got back their offensive rhythm as well leading by as many as 26 points, and they had their best game shooting outside the arc knocking down 14 3s.

Green looked like the forward who got the most first-place votes for defensive player of the year. He teamed with Andrew Bogut and Barnes making the night miserable for Randolph and Gasol in the paint. Green also pitched in offensively hitting his first three shots, and he finished with three 3s after coming into this game 5 of 17 outside the arc for the series.

Memphis led only briefly with its last at 9-8 and never got within double digits in the second half.

The Warriors took control with a 16-6 run that turned a tie at 18 into a 34-24 lead early in the second quarter, their biggest lead since the opener of this series.

Curry didn't take his first shot until 3:30 left in the first quarter, and he missed his first 3 along with a layup. He settled down and had seven points by the end of the quarter, including a 27-footer giving Golden State a 28-20 lead at the end of the quarter. The Warriors outscored Memphis 33-24 in the second, taking a 61-44 lead into halftime.

Grizzlies: They are 3-9 in franchise history in Game 4s, which includes being swept in the first three playoff series in team history. ... Memphis dominated the paint winning the last two games. They outscored the Warriors 44-34 in this game on 22-of-56 shooting. ... Jeff Green became the first reserve to score in double figures in this series with 10 points, and Vince Carter later joined him with 10.