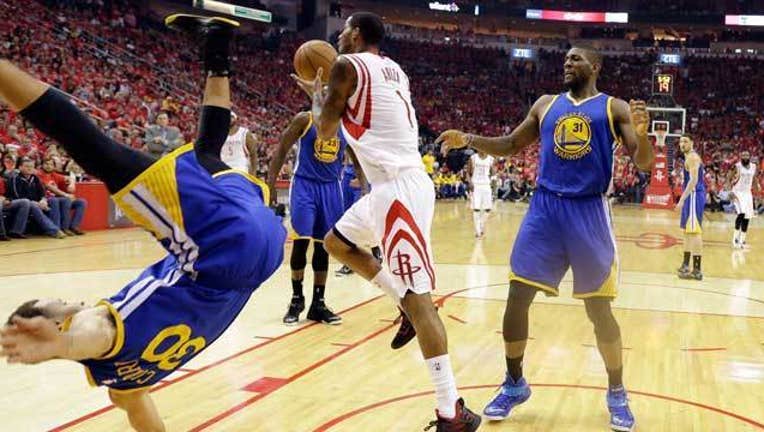 That's all it takes to shift a series and derail a dream season.

Stephen Curry and the Golden State Warriors found out how fragile a championship chase can be in their Game 4 loss at Houston when the NBA MVP took a scary spill that nearly gave a storybook season a frightening twist.

Instead, the moment just serves as a reminder to both teams: nothing is over till it's over.

The Warriors will get another chance to close out the Rockets on Wednesday night at home and advance to the franchise's first NBA Finals in 40 years. Golden State, which leads the Western Conference finals 3-1, is eager to end the series now and avoid more opportunities for something strange to happen.

"We just don't want to come back to Houston," Warriors guard Klay Thompson said. "It's not going to be easy. They are here for a reason. We have to come and play with more intensity and play together and we'll win the game."

Eight months of work almost came crashing down for the Warriors when Curry jumped in the air as Trevor Ariza started to shoot a layup midway through the second quarter Monday night. Ariza saw him and stopped abruptly, causing Curry to tumble over him.

Curry's head hit the court hard and his arms bent awkwardly. He remained on the floor for several minutes, walked to the locker room looking stunned and returned in the second half after the team said he passed the league-mandated concussion tests.

"It could have been a lot worse," Curry said.

Warriors coach Steve Kerr said Tuesday, a travel day for both teams, that Curry is doing just fine — other than the bruise on his head — and should be ready to go for Game 5.

In a different way, the Rockets can relate to losing a key player in a flash.

Houston was awaiting word from the league on the status of Dwight Howard, who received a flagrant 1 foul early in the third quarter after throwing an elbow at Andrew Bogut's head. Howard could be suspended by accumulation of flagrant foul points if the NBA upgrades it to a flagrant 2 after review.

Rockets coach Kevin McHale said Tuesday that Howard was retaliating to contact made by Bogut and the flagrant foul should not be upgraded by the league.

"I guess the one thing we'll learn is we should be the first one to grab," McHale quipped.

With or without Howard, the Rockets are trying to do what no NBA team ever has: come back to win a best-of-seven series after losing the first three games.

Houston hardly seems afraid of the moment. The Rockets became just the ninth team to rally from 3-1 down when they stunned the Los Angeles Clippers in the second round, and they believe that experience has prepared them for an even tougher task ahead.

"Our season comes down to winning one road game," McHale said. "That's not going to be anything new."

Here are some things to look for in Game 5:

RAINING THREES: The long ball has carried both teams all season — and perhaps now more than ever. In Game 4, the Warriors made 20 3-pointers and Houston hit 17 to set an NBA record for most 3-pointers combined in a playoff game. It'll be interesting to see what, if any, defensive adjustments each team makes on the outside.

GOING FOR FORTY: The MVP vs. the runner-up has lived up to the hype so far. Curry scored 40 in Golden State's 115-80 win in Game 3, and Harden followed up a poor performance with 45 points in Houston's 128-115 win in Game 4. Both teams will continue to rely on their leading men to carry them.

CRASHING THE BOARDS: Houston got back to playing big inside after a horrendous showing in Game 3, when the Warriors grabbed 21 more rebounds than the Rockets and highlights of Curry boxing out Howard were shown repeatedly. Golden State still won the rebounding battle in Game 4, but just 47-46.

EMERGING SHOOTERS: Both teams got a big lift from a player who had been struggling with his shot and are hoping the trend continues. Josh Smith scored 20 points on 7-for-8 shooting, including 3 for 4 from 3-point range, in Game 4. Klay Thompson finally found his stroke late in the first half, too. He scored 24 points and made 6 of 13 3-pointers.

HOME-COURT ADVANTAGE: If the Rockets want to pull off a historic comeback, they'll need to win twice on Golden State's home floor. The Warriors are 45-3 at raucous Oracle Arena, including 6-1 in the playoffs. The Rockets played well in the first two games in Oakland but lost 110-106 and 99-98. Houston last won at Oracle Arena on Dec. 13, 2013.