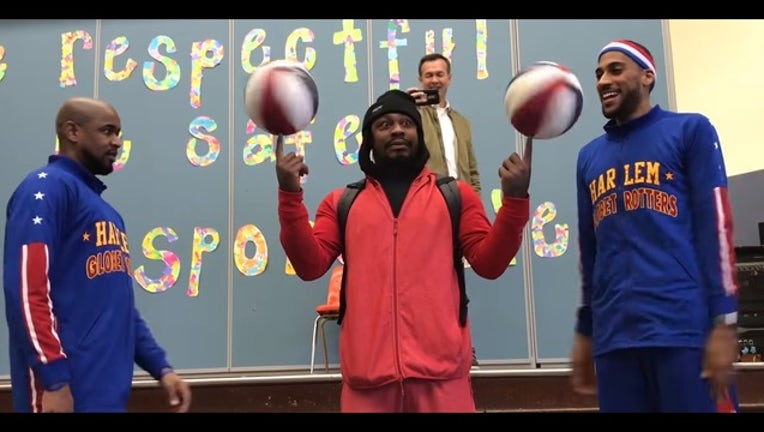 Zues McClurkin and Scooter Christensen lead the presentation at Emerson Elementary and Lynch made an appearance that had the kids joyfully shouting his name in unison.

The video starts off with McClurkin standing on the blacktop with students whose excitement lifted their feet off the ground and stretched their arms high as they sported inflated smiles.

Ahead of their seven Bay Area games, the Globetrotters are giving back to various communities throughout the area. Lynch’s former school was one of the team’s several stops and he decided to come along.

“I really wanted to come, show some support and tell y’all how much I enjoy being back in Oakland – being able to see y’all a little more often,” said Lynch.

And Lynch even got a shot at trying out some of the world-famous moves. The famed finger spin proved its difficulty as the ball on Lynch’s left hand veered and his eyes grew. Students got their chance to participate, too, and then the two professionals put on a ball-handling show that had kids dancing on the assembly room floor.

The bullying prevention program was designed in coordination with the National Campaign to Stop Violence. And during the demonstration, McClurkin called out to the students to join him in reciting what the “ABC” acronym stands for: “A” is for action, “B” is for bravery and ‘C” is for compassion.

Part of the awareness is educating how being part of a team relates to how kids can support one another in an effort to stop bullying,

After the presentation, Lynch and the Globetrotters took it to the outside courts where Lynch tossed McClurkin alley-oops and the three signed autographs.