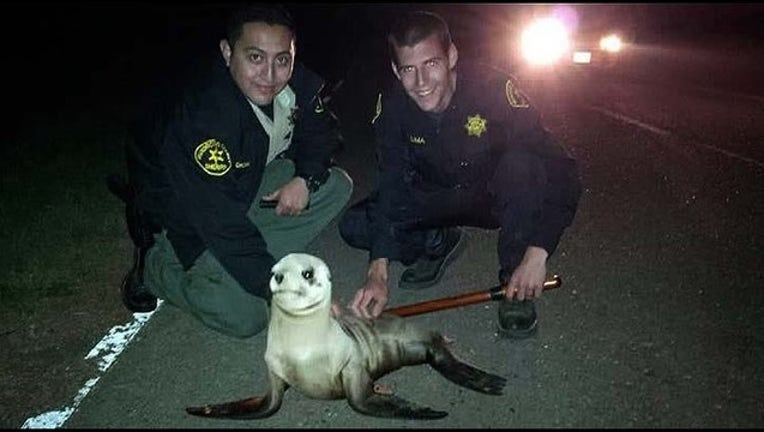 FORT BRAGG, Calif. (AP) — A healthy sea lion pup that was returned to the sea by deputies after waddling a quarter-mile onshore seemed to be staying in the waves on Wednesday — at least for now, officers said.

"There's no reports of him running down the street or anything," Mendocino County sheriff's Capt. Greg Van Patten said.

Deputies patrolling Highway 1, just south of Fort Bragg, spotted an animal moving slowly in dark, dense fog on Sunday. They discovered it was a sea lion pup, measuring 2 1/2 feet long and weighing about 20 pounds with a tag attached to its front flipper.

The animal — believed to have met humans previously through a stay in a marine-animal rehabilitation project — seemed happy to have come across the deputies.

"He kept coming up to them," like a pet dog, "rubbing against their legs," Van Patten said.

Officials contacted the Marine Mammal Center in the San Francisco Bay Area, and officials there identified the pup from its orange tag as having been released from a marine mammal rehabilitation center in Southern California.

On Sunday, it climbed into the back of the patrol car, and deputies took some pictures with their new friend, including one of the sea lion wearing a seat belt, before driving it back to the ocean. Center spokeswoman Laura Sherr said it's likely the pup previously had been emaciated, rehabilitated and released.

She warned that the public should never touch or try to rescue a stranded sea lion. The animals can be aggressive and if threatened will bite, she said.

A record number of stranded sea lions and seals have been rescued along the Northern and Central California coast this year. Scientists say warmer coastal waters are forcing nursing mothers in the Channel Islands or Mexico to head out farther for food, leaving behind their young for too long.

The animals included many emaciated and dehydrated pups along with a young sea lion that was spotted in March hopping through an almond orchard a mile from the San Joaquin River in Central California.

Van Patten said the seal pup found inland on Sunday was the first such discovery in his 17 years on the job.

Sherr said as of Wednesday, 873 sea lions had been rescued from the coastline so far this year. That number is up from 59 of the same species at this time last year, she said.