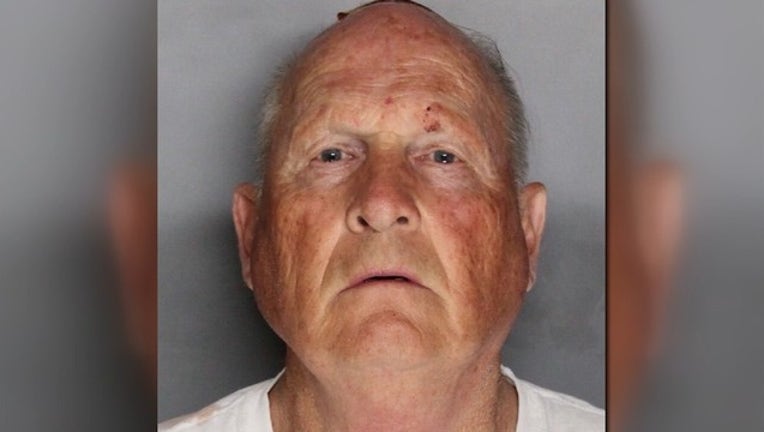 SACRAMENTO, Calif. (AP) - Joseph DeAngelo's six-year career as a cop came swiftly to an end after being busted for shoplifting a can of dog repellant and a hammer from a Pay N' Save store in a Sacramento suburb in 1979.

Authorities are now wondering if the items he snatched were intended as tools for the sinister rash of crimes he's suspected of carrying out.

DeAngelo, 72, was accused Wednesday of being the Golden State Killer who terrorized suburban neighborhoods in a spate of brutal rapes and slayings in the 1970s and '80s before leaving a cold trail that baffled investigators for decades.

He was charged with eight counts of murder in three counties after being linked to the crimes through his DNA. Authorities said he was responsible for a dozen slayings and some 50 rapes and that other charges could be filed.

Most of the crimes, predominantly sex assaults but also two slayings, occurred in the three years he was an Auburn police officer in the Sierra foothills outside Sacramento.

The attacks on sleeping women - and sometimes their partners - in middle and upper-middle-class subdivisions east of the state Capitol shattered an innocence where people didn't lock their doors and children rode bicycles to school and played outside until dark.

Sales of locks surged. Lights burned all night. There was even talk of vigilantes with CB radios patrolling streets to nab the masked, armed man who became known as the East Area Rapist.

"It all changed," said Sacramento County District Attorney Anne Marie Schubert, who was 12 at the time of the crimes. "The memories are very vivid. You can ask anyone who grew up here. Everyone has a story."

Schubert and law enforcement officers refocused their attention on the case two years ago on the 40th anniversary of the first known attack.

But until a week ago, DeAngelo , who lived in a neatly kept home in the Citrus Heights suburb where many of the attacks went down and where he was caught stealing, was not in their sights.

A break in the case and the arrest came together in "light speed" during the past six days, Schubert said, though authorities refused to reveal what pointed to DeAngelo.

Sacramento Sheriff Scott Jones said detectives with "dogged determination" were able to get a sample of DNA from something DeAngelo discarded, though he wouldn't say what the item was. The genetic material was not a match, but there were enough similarities that investigators got a second sample, which proved conclusive.

"We knew we were looking for a needle in a haystack, but we also knew that needle was there," Schubert said.

In May 1977, as the frequent attacks gained national attention, the rapist told a victim he would kill two people if he saw stories about her attack, according to an Associated Press article at the time.

Some eight months later after another nine assaults, he made good on that promise, authorities said.

Brian and Katie Maggiore were fatally shot in Rancho Cordova on Feb. 2, 1978 while walking their dog.

The number of attacks recorded by police dropped precipitously after he was fired from the police department. But they intensified in violence and moved to Southern California.

Nine killings occurred between October 1979 and August 1981. After a rape and killing in Orange County five years later, the culprit appeared to have quit.

Although it's unusual for serial killers to stop, Jones said there's no evidence DeAngelo committed any crimes after 1986.

"We have no indication of any crimes with a similar or at least a close enough link to his MO and other things that he's done in the past to link him to anything from '86 on," Jones said. "We just have nothing at this point."

DeAngelo had one other minor brush with the law Jones wouldn't reveal in addition to the shoplifting incident.

The graduate of nearby Folsom High School and U.S. Navy veteran who served during the Vietnam War seemed to settle into his own suburban existence in the modest three-bedroom home on Canyon Oak Drive.

For 27 years, he worked in a cavernous Save Mart Supermarkets distribution warehouse in Roseville, a Sacramento suburb, before retiring last year, company spokeswoman Victoria Castro said.

"None of his actions in the workplace would have led us to suspect any connection to crimes being attributed to him," she said in a statement.

Natalia Bedes-Correnti said DeAngelo appeared to be a "nice old grandpa" who lived with an adult daughter and granddaughter. But he also had penchant for cussing loudly when he was frustrated.

"He liked the F word a lot," Bedes-Correnti said.

Deputies kept watch on the house and his comings and goings for several days and took him by surprise Tuesday afternoon as he walked outside.

As he was being arrested, he told officers he had a roast in the oven. They said they would take care of it.