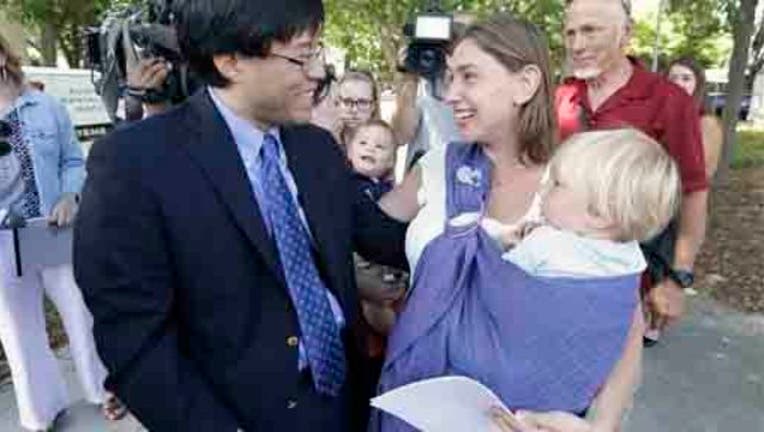 SACRAMENTO, Calif. (AP) — Gov. Jerry Brown on Tuesday signed a hotly contested California bill to impose one of the strictest school vaccination laws in the country in the wake of an outbreak of measles at Disneyland late last year.

The following is a look at what the new law means for the nation's most populous state:

WHAT PROMPTED THE BILL

After a measles outbreak at Disneyland in December sickened over 100 people in the U.S. and Mexico, Democratic Sens. Richard Pan of Sacramento and Ben Allen of Santa Monica introduced the bill, designed to raise immunization rates in under-vaccinated pockets of the state.

The state's overall vaccination rate appears sufficient to maintain what immunologists call herd immunity, or the percentage at which enough people are vaccinated to protect the community as a whole. But suburban areas have seen a decline in immunizations in the past decade, with some schools having immunization rates near 50 percent. Herd immunity for measles is between 92 and 94 percent, according to the U.S. Centers for Disease Control and Prevention.

Pan, who is a pediatrician, and Allen, whose father has polio, framed the legislation as a crucial public health measure, holding that the Disneyland outbreak is only a hint of what's to come if community immunity continues to drop.

California now joins West Virginia and Mississippi as the only states without a personal-belief exemption for vaccines. Medical exemptions will still be available for children with serious health issues. When considering exemptions, doctors may take family medical history into account.

Effective the 2016-17 school year, children whose parents refuse vaccination and are not granted a medical exemption must be homeschooled. School-age children who currently claim a personal-belief exemption will need to get fully vaccinated by kindergarten and seventh grade, the state's two vaccine checkpoints. The law applies to both public and private schools, as well as daycare centers.

In a rare message accompanying his signature, Brown expressed his support for the new law.

"The science is clear that vaccines dramatically protect children against a number of infectious and dangerous diseases," Brown wrote. "While it's true that no medical intervention is without risk, the evidence shows that immunization powerfully benefits and protects the community."

The bill's supporters, including doctors, hospital representatives and health advocates, celebrated the news at an elementary school Tuesday. Lawmakers held babies, declaring the public would be better protected as a result of the bill.

The bill has proved contentious, with thousands of parents calling representatives and protesting at the Capitol. One state senator said pushback has been so fierce that he briefly closed his district office out of concerns for his staff's safety. Amid this intensity, the bill passed through four legislative committees and survived votes in both houses. The Senate on Monday approved amendments to the bill, and the governor signed it less than 24 hours later.

Opponents of the bill were deeply emotional Tuesday, but they vowed to continue their fight. Our Kids Our Choice, an advocacy group that rallied against the bill, said it still has a number of options and is considering both litigation and taking the question directly to voters through a referendum. Pan and Allen said they are confident the bill would withstand a legal challenge, noting similar laws have held up in state courts and even in the Supreme Court.