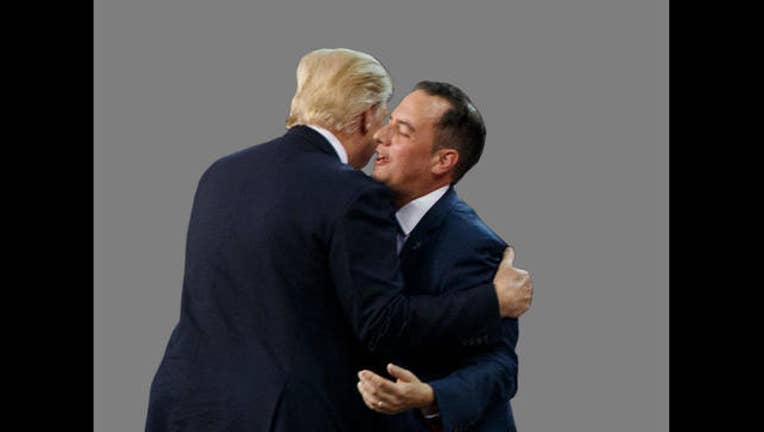 The official said Priebus' request came after the FBI told the White House it believed a New York Times report last week describing those contacts was not accurate. As of Thursday, the FBI had not stated that position publicly and there was no indication it planned to.

Priebus' discussion with FBI deputy director Andrew McCabe sparked outrage among some Democrats, who said he was violating policies intended to limit communications between the law enforcement agency and the White House on pending investigations.

"The White House is simply not permitted to pressure the FBI to make public statements about a pending investigation of the president and his advisers," said Michigan Rep. John Conyers, the top Democrat on the House Judiciary Committee.

A 2009 memo from then-Attorney General Eric Holder said the Justice Department is to advise the White House on pending criminal or civil investigations "only when it is important for the performance of the president's duties and appropriate from a law enforcement perspective." When communication has to occur, the memo said, it should involve only the highest-level officials from the White House and the Justice Department.

The White House official would not comment when asked if the administration was concerned about the appropriateness of Priebus' communications with McCabe. The official was not authorized to disclose the matter publicly and insisted on anonymity.

The FBI would not say whether it had contacted the White House about the veracity of the Times report.

CNN first reported that Priebus had asked the FBI to weigh in on the matter.

Trump has been shadowed by questions about potential ties to Russia since winning the election. U.S. intelligence agencies have also concluded that Russia meddled in the campaign to help Trump defeat Democrat Hillary Clinton.

Last week, Trump fired national security adviser Michael Flynn because he misled Vice President Mike Pence and other White House officials about his contacts with the Russian ambassador to the U.S. Flynn, who was interviewed by the FBI about his contacts, is said to have talked with the ambassador multiple times during the transition, including about U.S. sanctions policy.

Still, Trump and his advisers have denied contacts with Russian officials during the election. Last week, Trump said "nobody that I know of" spoke with Russian intelligence agents during the campaign.

Priebus alluded to his contacts with the FBI over the weekend, telling Fox News that "the top levels of the intelligence community" have assured him that the allegations of campaign contacts with Russia were "not only grossly overstated, but also wrong."

"If the White House chief of staff can make public claims about the supposed conclusions of an FBI investigation, then Director Comey can come clean with the American people," Wyden said.

"As a general matter, investigations and prosecutions should be about gathering the facts and the evidence and applying the law," Shur said.

During the campaign, Trump and other Republicans vigorously criticized a meeting between then-Attorney General Loretta Lynch and former President Bill Clinton, husband of Trump's general election opponent. The meeting came as the FBI -- which is overseen by the Justice Department -- was investigating Hillary Clinton's use of a private email address and personal internet server.