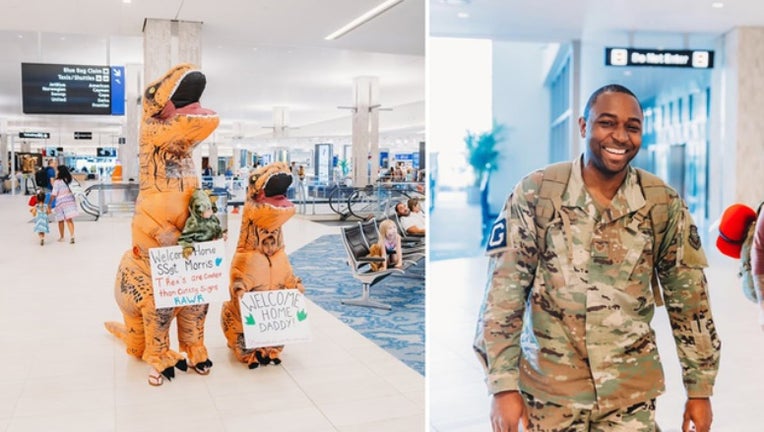 TAMPA, Fla. - It's a welcome home greeting 65 million years in the making!

DeAndre Morris is a staff sergeant in the Air Force, and was deployed in southwest Asia for nearly seven months.

When it was time for him to return home, his wife Taylor decided to surprise him at the airport in a novel way: by dressing herself and her children up as dinosaurs.

"During my pregnancy with our son, we didn't find out the gender so we called him Little Foot, that is where the dinosaurs came from," she told FOX 13. "I knew my husband would know it was us as soon as he saw the costumes."

She and her young daughter dressed up in inflatable T-Rex outfits, while their infant son donned a dino onesie. Together, they held signs to welcome her husband home, with one that said, "T-Rex's are cooler than cutesy signs."

Katie Vogel with Sweet Novalee Photography waited along with the family at Tampa International Airport on Saturday for the happy reunion, capturing photos of DeAndre laughing when he spotted his welcoming committee.

"He thought it was hilarious!" Taylor said.

This was DeAndre's second deployment since joining the Air Force in 2014.

"We made cute signs last time so I wanted to do something funny this time around," Taylor said.

The moment was even more special for the family, since he returned home on Oct. 5, his son's first birthday.