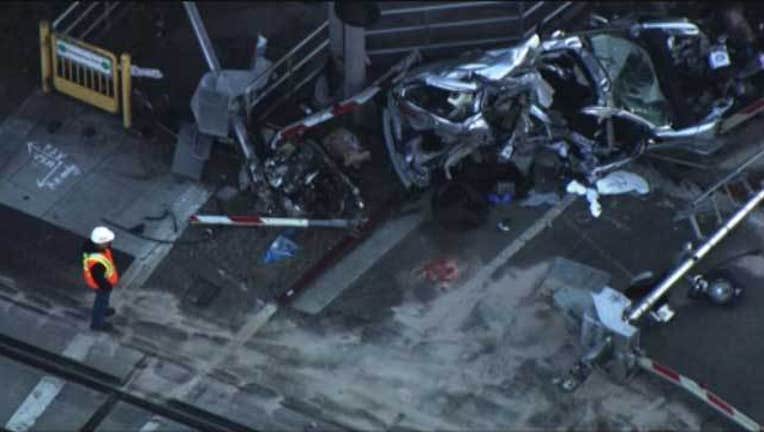 The violent collision sent the car flying 40 feet across an intersection.

All trains in both directions were halted after southbound Caltrain No. 360 hit the car at Ravenswood Avenue at 4:46 p.m.

The female driver was stuck at the Ravenswood crossing where the car was hit, Menlo Park Fire Protection District Chief Harold Schapelhouman said.

The car flew 40 feet across the intersection and the driver had to be extricated from the car that was found on a railroad crossing box and pole. She was taken to Stanford Hospital in critical condition and was pronounced dead a short time later, he said.

A child safety seat was found in the car but was unoccupied, according to Schapelhouman.

The car was "pretty much totaled," he said.

All trains were stopped in both directions until about 5:30 p.m. when a single track was opened through the area, Caltrain officials said.

Around 6 p.m., the northbound tracks reopened for all trains, according to Caltrain officials.

The involved train sustained substantial damage in the crash and may need additional repair work before it is removed, according to Caltrain officials.

Preliminary reports indicated the railroad gate crossing was properly working when the crash happened, according to Caltrain officials.

About 400 people on board the train were not injured, Caltrain officials said. The crash is also impacting traffic on either side of the Ravenswood railroad crossing, according to Schapelhouman.