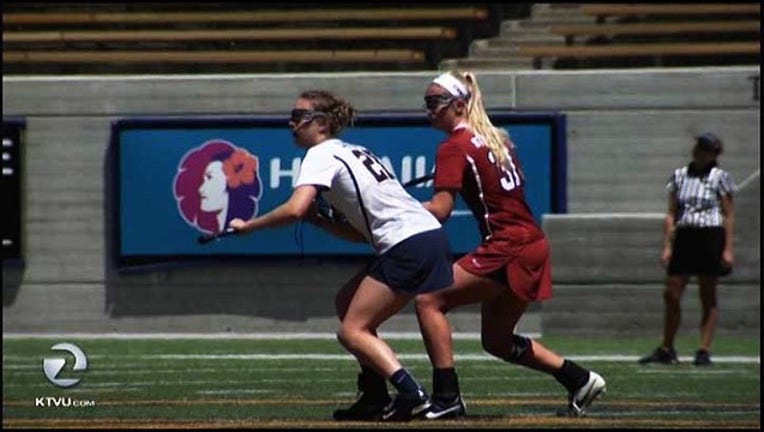 Girls and women's lacrosse is becoming as popular as soccer in parts of the Bay Area with one local university set to compete for the national title.

At U.C. Berkeley, Sunday was Big Game day. No, not that Big Game. It was Cal versus Stanford in women's lacrosse.

It's a sport with a long history on the East Coast.

"Kids get lacrosse sticks when they're born. It's like a birth gift," said parent Amy Semansky. But now, it's gaining traction here in the West.

"I just love how it's a matchup sport, and you just have a lot of ability to be aggressive, and really shifty, and so it's really fun," said Hannah Farr, senior captain for Stanford Lacrosse.

While California is a good West Coast team, Stanford is now the 15th ranked team in the nation.

"I think we've been tested against Notre Dame, Ohio State, Penn State, but they're just a great group of girls who have come together and their cohesion throughout the season has been awesome," said Stanford assistant coach Chelsea Gamble.

To play at this level, an athlete needs a solid foundation. And that's what girls around the Bay Area are building.

"You can tell, the girls, they love the competition, they certainly love to win, and they like to leave it all out on the field," said Charlie Doering, the coach of the Scorpion Stingers 11-and-under lacrosse team.

At Campolindo High School, there was a club league of girls up to 11 facing off. One game was between the Southern Marin Wolfpack and the Diablo Scorpion Stingers.

"At least in the East Bay, I know people talk about soccer season, baseball season, and now lacrosse season. And I think it's kind of a major player right now," said parent Kevin Olmsted.

"I like lacrosse cause it's different. It's not like everything else that other people play all the time. Like you rarely see lacrosse on TV," explained Stingers player Maddie Bach.

The boys game and girls game are different, right down to their different sticks. But just ask any of the girls, they'll tell you their game is no less intense.

"I love taking it to the cage and shooting from defense. It just feels really good to get a goal," said Stingers player Tess Olmsted.

Their parents couldn't be more enthusiastic watching the girls compete.

"She loves being part of the team, it's been really a wonderful experience for her," said Karina Howe of her daughter, Taylor, the Stingers goalie.

"It's got a great energy to it. I think that's why the girls love to play," said parent and coach Amy Semansky.

The girls are all working towards a common goal, a successful team in a sport they all love. "I just think it's super cool, like girls lacrosse. Mostly it's for boys, but girls can do it too," said Tess Olmsted.