Tuesday morning bought yet another fire at the long-festering wound on Oakland called the Wood Street encampment. So far this year, there have been 48 confirmed fires there.

Oakland, California - Oakland was facing a short deadline from Gov. Newsom to either do something about the nagging Wood Street homeless encampment or lose millions in state assistance going forward. So, what, if anything, has happened?

Tuesday morning bought yet another fire at the long-festering wound on Oakland called the Wood Street encampment. So far this year, there have been 48 confirmed fires here, including two in the last week. Last year, there were 155. 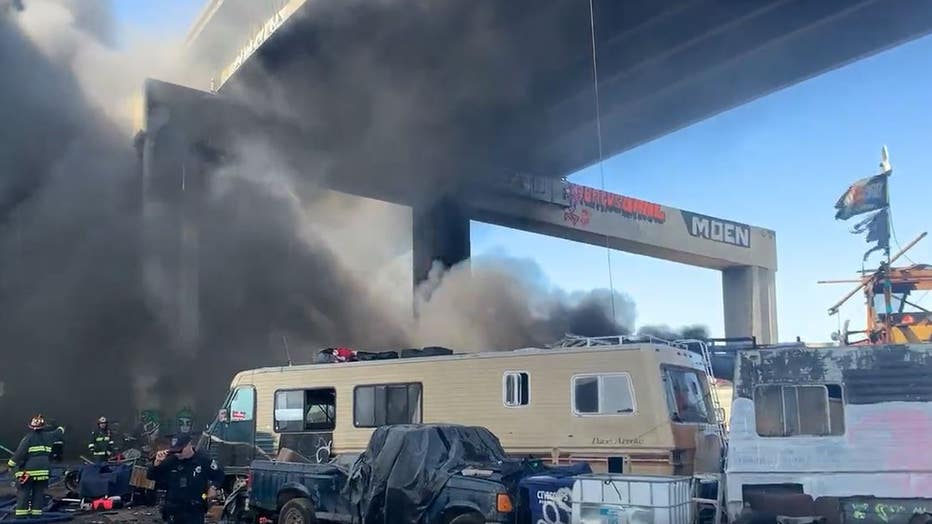 A fire at 34th and Wood streets.

Some say it is a place of danger while others say it's a pit of despair created by public agencies and private landowners. Fact is. most of the people who were here are already gone. And, no one really wanted to talk to us except one person who calls herself "E"

"I know, BNSF Railroad and the city and the Highway Patrol and Caltrans all working together basically," said E.

Last Thursday, the governor's office e-mailed a warning letter to Oakland's city attorney that, within 24 hours, the city should reply what Oakland will do to offer temporary shelter for individuals in the Wood Street encampment.  Otherwise, the state will redirect funds.

The state complains that it has give $300 million total to the City of Oakland and Alameda County, including $4.7 million explicitly for rehousing activities at the Wood Street encampment.  Yet, people remain.

"I think maybe it would be nice if like have, like be allowed to do what we do and not have it illegal and give up water and electricity," said E.

It took us most of the day to find out that the Oakland city attorney e-mailed a response to the governor last Friday, saying they're reviewing the letter, want to help those folks and will get back to him. Yet. for now, people remain.

"I'm not really planning to stay here that much longer," said E.

Experts say the real problem is that California is between two and four million housing units short. Until we resolve that problem, what they're doing at Wood Street and countless other encampments is just a big game of whack-a-mole